A picture says … my grandfather’s hands

A picture says … my grandfather’s hands

I wrote this post for Kelly Exeter’s “A picture says“, because she is an angel. 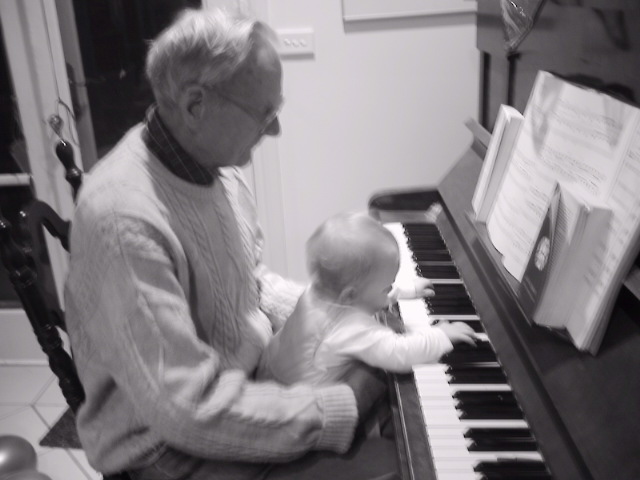 My grandfather had ugly hands.

They were swollen with diabetes like red balloons and etched with scars from farm machinery. Three of his fingertips were missing. He told me he cut one off when he was chopping firewood as a kid. The others were lost to gangrene and weather and time.

I was afraid of his hands. I never held them, even when he reached out for me in crowds or tried to help me cross the street. They felt like sausages and sometimes he squeezed too hard without realising.

His hands made him clumsy. He couldn’t hold a fork properly and when we played Chinese Checkers he always spilled the pieces across the table. He couldn’t turn the pages of the newspaper and I had to push the key into the lock for him.

But for almost ninety years, he took those same hands and stared down his piano. He dared it to tell him he couldn’t do it with hands that ugly. He defied its cries for players with all fingertips intact.

He couldn’t read music, but he would sit down at my upright and his callouses would become nothing. My nanna would come and sit next to him and rest her head against his and sing. He would play into the night and his hands didn’t give in even though he couldn’t make them press the numbers on the telephone. He would miss notes and play two at once but if he cared he never let on.

When he first learned that he had cancer, he asked my nanna to buy him an organ. The fancy one he had always wanted, the same as the one at their church. It was six thousand dollars. She knew that was enough money to feed her for months after he was gone, but she bought it for him. And he played it every day, the same tunes over and over. At night, he would pull the leather cover over and run his ugly hands across it, just to make sure.

The last time I saw him before he died, he was a very old man with hollowed cheeks and drawn skin, and he was sitting at my old piano with my daughter on his knee. His fingers danced across the keys and she laughed and clapped. He drew music from the crotchety and poorly tuned instrument like it was the most natural thing in the world.

Then she reached for his big, ugly hands and wrapped her soft baby fingers around them. So I did too.