January 10, 2013 In Parenthood By Anna Spargo-Ryan

We had some Big Dramz at my place last night. If you’ve ever wondered why you might need an ex-husband, one of the reasons is that he will occasionally come to your house, sit on your couch and then accidentally elbow your mutual child in her wobbly tooth.

I was having a relaxing sit in my study when I heard the wailing. Dear God! I went, What horrors have befallen my daughter? When I rushed out to the living room, Lily was howling and flailing and her mouth was full of blood, so in the usual rational way I thought she had been bitten–in the mouth–by a spider. Georgia continued to sit and play Lego Harry Potter, because she’s cool in a crisis, but Lily looked and sounded like she was being quartered.

‘Oh, dad punched your tooth!’ The scene of the tooth punching was grim, but the tooth itself clearly ready to come out. ‘I’ll just finish it off,’ I said, in an hilarious display of incorrectness. About 18 months ago, Lily fell in the school playground and knocked out both of her front teeth. The residual effect of having a dentist sedate her and then yank on her face is that she would sooner let you saw her leg off than put anything near her mouth.

We went through the usual process of pleading (come on just let me do it!), crying (this is really hard for me too!), begging (just let me do it), negotiating (you can have a Frosty Fruit!) before we arrived at the last resort option of pinning her to the table and putting her in lifelong therapy.

I don’t know how to describe the noise to you. It was as if we’d concurrently taken away her favourite toy, killed her cat, stabbed her in the arm, told her there was no such thing as mangoes and laughed about it in her face. I sat on the floor with my hands over my ears while Michael did the hard part. Then I cried. For half an hour.

‘Oh yeah, it feels fine now!’ she said, and I just rocked back and forth.

She set about writing a letter to the Tooth Fairy. After it was all coloured in she narrowed her eyes at me and said, ‘I’ll know if the Tooth Fairy is real, if her handwriting is different from yours.’ Challenge accepted.

Lily’s letter to the Tooth Fairy

The Tooth Fairy wrote her reply with a flourish: ‘i’s dotted with tiny flowers, a border of leaves and beautifulness, and she left behind an extra dollar to make up for the childhood-ending experience. 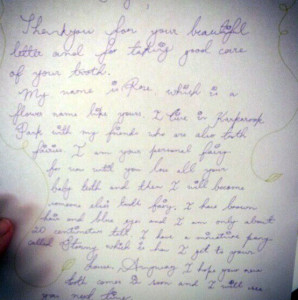 The Tooth Fairy’s letter to Lily

Lily pocketed her cash with glee and went about her day. An hour ago she came to me with the same narrowed eyes and said, ‘Mum, the Tooth Fairy writes capital ‘A’s just like you do. Isn’t that weird?’

Give me back the two bucks, Lily. 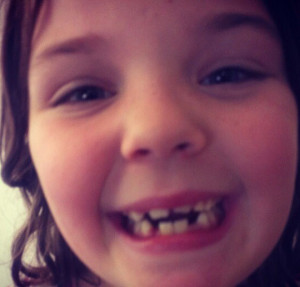