Cats of the Round Table – Anna Spargo-Ryan

Cats of the Round Table

Cats of the Round Table

You know the way an animal can come in and tear out your heart in only two weeks?

It seems ridiculous, like looking for an excuse to be sad about something. Lament the sickness of the kitten, the money you will have to spend, the decisions you will have to make. Throw your hands up at the questions the children will ask: How long does it take for them to wake up again after they’ve been put to sleep? What a knack, to be able to just swoop in on a family and render them completely unable to do anything except whatever it takes to keep you going. 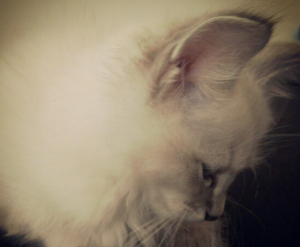 For the first week he was here, he did all the usual annoying kitten things. While I worked he used my brand new jeans as a kind of claw hook device to help him up to my desk, where he destroyed everything he could find. When he’d done enough destroying and was sleepy, he put his face between my boobs and slept. We were mates, even if I sometimes had to hold him in one hand and send an email in the other, because he wouldn’t stop walking on my keyboard. He was bright and happy. 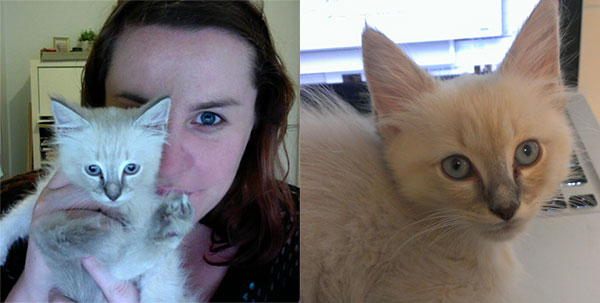 And then he wasn’t.

With little warning, he crashed. In one hour he went from plodding around the house on his little kitten legs to curled up on Gaz’s chest, his breathing thick and laboured. I wondered if I should take him to the vet. By the next morning, I wondered if he would make it the four blocks in the car. Now he’s been there for four days. He has a liver shunt, which means his blood is flowing the wrong way. He’s on IV fluids around the clock. We’re waiting for him to be strong enough to have a general anaesthetic, so they can fix his liver. 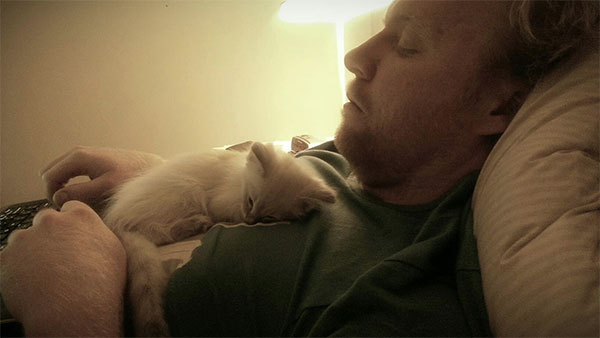 It’s funny, when you’re staring down the barrel of losing an animal you’ve only just met, how you cling to the very little you know about them. Like you owe it to them. Like you’ve only known them for a couple of weeks, but they are so well meaning that you can’t possibly just let them slip away without understanding all there is about their tiny lives. Arthur bites fingertips. Arthur likes to sleep in dark corners. Arthur doesn’t meow, he stares right in your eyes and shouts at you. Arthur can hold his own against dogs. Arthur is a very polite toileter. Arthur blinks a lot. Arthur has a longer than normal tail. Arthur likes to eat in complete silence. 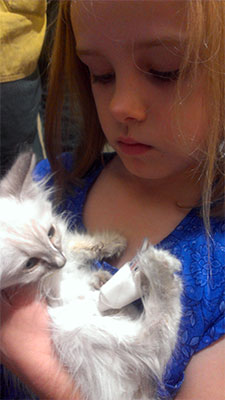 Arthur might be dying. If he doesn’t get well enough to have surgery, he will die. Having a liver shunt is Not Compatible With Life. It can be corrected, but he might just be too weak. Hoping and wishing that he would grow strong doesn’t seem to be making any difference. Gaz wears sunglasses inside, in case he accidentally thinks about Arthur and starts crying. We’ve known him for two weeks, but that’s the commitment you make when you bring an animal into your life: to do as much as you can. “As much as you can” is different for everyone, but that’s the agreement. You live here and love me, and in return I will do as much as I can.

Arthur is brave. Yesterday we took him to have a liver ultrasound and he tried to escape, just him and his catheter and the big world. He didn’t look as bad as we expected, and we said this to the vet: “He doesn’t look as bad as we expected,” and the vet told us they were keeping him alive with saline and drops of high calorie wet food on his tongue, but that if he was away from the drip for more than a couple of hours, he would die.

When we asked them if he was going to be okay, they said, “Probably not,” and Gaz put his sunglasses on.

Update: Arthur made the decision for us and died on his own terms last night. We all went to say goodbye, then afterward I saw a lady from work at the supermarket and she asked me how I was and I just shouted “MY CAT DIED” at her, so that must have been enjoyable for her.