How not to raise suspicions in knife shops

I bought a knife yesterday. From a knife shop.

In the past I’ve always bought knives from supermarkets. They are quite good value, I feel. You pay eight bucks and you have the sharpest knife in the world for about two days and then you chuck it and buy another one. See also: supermarket frypans, supermarket saucepans and supermarket brand Cornettos.

Yesterday it occurred to me that this is not necessarily sound economics, and that maybe it was possible to buy one knife and just use that knife for approximately more than five continuous strokes. ‘Strokes’ is what you call it when you cut through something, I think.

I had decided I was going to make pizza, which seemed like an opportune time to treat myself for successfully feeding my family once again. So I went to the knife shop. Calling it the knife shop is a bit misleading, because 90% of its stock is kitchen knick knacks, but it does sell knives, which was perfect for me considering I was hoping to buy one. I did some research beforehand, calling my brother to find out what knife he owns, so that I might avoid looking like the type of fool who usually buys her knives from the supermarket.

Once I was inside the knife shop, my dad called me, so I became the creepy lady stalking around the knife shop and talking quietly into her phone. I am almost certain there is a silent alarm for people like me.

Then, “Hello!” I went, and asked for the knife by name. “I’d like a 25cm Victorinox!” Yes, my plan to be a sophisticated knife purchaser was going quite well. The sales woman took out a very sharp knife from behind the counter and asked me to try it out. Try it out. A never-been-used knife, sharp as can be, just try it out in my store, you look trustworthy.

I wasn’t sure what she meant, to be honest. In the infomercials the benchmark was always a ripe tomato, and this knife shop seemed quite low on those. “Go on, try it,” she insisted, smiling. I dragged it across a plastic chopping board for a few seconds and made murmuring noises until she nodded, at which point I also nodded. “Yes,” I said, “this is clearly a very good one of those.” I literally had my card in the machine when out came: “You’d want to be pretty sure people weren’t just going to pretend to buy a knife and then stab you, huh?”

She laughed the way you might if someone had told you that your parents were getting divorced.

“One time, a man came in and asked to look at the hand knives. He just took one and flicked it open from his wrist, like he was fucking Crocodile Dundee. I didn’t sell him any knives.”

“Did you push the panic button?” I said. She stopped packing my bag and looked me right in the eye.

I assured her she wasn’t, and to demonstrate my high sanity levels I added an avocado scooper, an egg slicer and a bottle opener that sings Carole King’s greatest hits to my order. 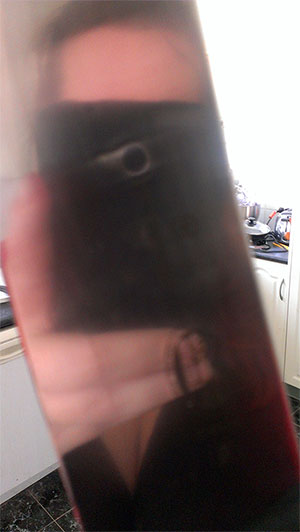 Now I want to change my knife-buying habits:

“Hi there! Do you have a panic button? I want to look at the knives. The pretty ones.”

There used to be a Wüsthof Trident stand at Target Southland. Until someone THREW A CLEAVER at a staff member.

Also, I think you’ll find they are supermarket brand Drumsticks.

One of my friends thought it was hilarious to go into Supercheap Auto and ask which paint the guy behind the counter recommended for sniffing. Poor guy didn’t know which way to look lol.

I will have nightmares tonight.

Oh and I didn’t realise you were back blogging???? Missed that one, didn’t I. Glad you are though x

Well, sort of! Every time I start a new post I realise I have nothing to say ;) Thanks Jodi x

Can I come with you next time? Thanks