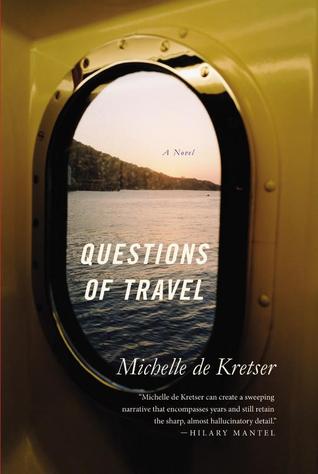 This is my second book review. That’s why it’s not very good. Also general disdain.

Last week I read the multi-award-winning, highly acclaimed tome Questions of Travel, by Michelle de Kretser. I had tried for some time to read it on my Kindle, but after making no progress whatsoever I bought the real paperback version. It’s huge. It’s so huge that sometimes I forgot that I was still reading the same book. It’s so huge that I had to do hand exercises before reading it. It’s so huge that I got shoulder pain.

Essentially this is a tale–and it is a tale, in that kind of meandering, multiple decaded way–about a man and a woman who live different lives in different places. Ostensibly they are exploring what “travel” means; for Laura, it is physical travel on a kind of sex-fuelled extended GAP millennium, and for Ravi it’s a bit of virtual travel and then actual travel. They go around the place and we learn everything there is to know about more than sixty minor characters.

I just feel indifference toward this book, and that makes me sad. I wanted to love it. In some ways I did; it became a kind of old friend with whom I curled up with each night, wanting to know what happened next but kind of resenting being forced to listen to it. I thought that the sheer length of it hid a great many flaws in the writing, where words had come apart or not quite reached their destination or appeared in place of different, better words. At times the jumping between points of view–sometimes in the same paragraph–rendered me unable to understand who was talking, where they were, what day it was. The narrative leapt backwards and forwards in a matter of sentences and I re-read pages of it just to try to find my bearings. By the time I’d traced it back to the first mention of the current point of view character (some chapters had 10) I’d forgotten why I cared in the first place.

The storytelling is sound and some of the imagery is lush and vivid. But I didn’t connect with any of the characters on any level, partly because I didn’t find them sympathetic (even though Ravi at least should have been, intellectually) and partly because I was forced to spend so much time going back to figure out who the secondary and tertiary characters were, the nature of their relationship to the main characters, and why that made them significant. And often it didn’t–in the culmination of 500 pages, characters I’d forgotten somehow became entangled what I found to be a disappointing climax.

I’ve read quite a few interviews with the author, and she often speaks to the themes of the book and the heartbreak that she hopes readers will experience. Although the themes were present, I didn’t feel them. They got lost in the overly ambitious language, where the choice of words drowned their meaning (this is the only book I’ve read with more than once instance of the word ‘labyrinthine’). The complexity of human nature, futility, grief, struggle, displacement … they are all there, but they’re hiding behind an unnecessary complex narrative that is just so bloated. Strands begin and are forgotten, or only half-realised (the ongoing thread about technology (some of which could have benefited from further research) is an example of this).

On the whole, I found it compelling reading, but somehow almost impossible to invest in.