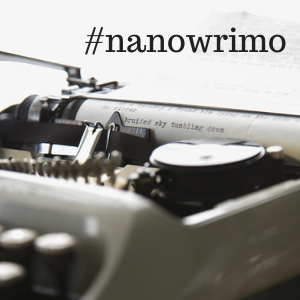 To my surprise, I am still writing to the curve. 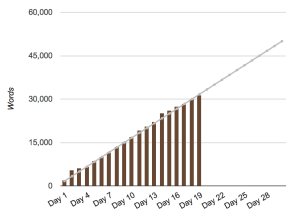 It feels strange, day after day. Every morning thinking this is the day I’ll stop writing it, but being pushed on by that brown line. I’m competitive, even with myself. Especially with myself.

Sometimes the story comes together in pockets, and I sit back and go, “Aha! That’s what it’s about!” and then two hundred words go by and I have no idea again. I am equally enchanted by my characters and also feeling like they’re bits of paper in the wind. Writing intensely makes me feel so close to the story that I’m pushed out the other side, typing with my hands behind my back and sneaking a look every so often to see if I can see the story in there somewhere.

On the whole, Nano is making me feel rather more introspective than I’d like. I’m an extroverted gal. If I spend too long without people around me, I go a little (more) nuts. But right now I feel like I’m taking myself awfully seriously, and doing a lot of Very Deep Thinking, which isn’t even interesting for me, let alone the poor sods who have to live with me.

At any rate, here is an excerpt.

Noel took me into his home, which was, as best I could determine in the dark, a kind of windowless brick chamber, one-roomed and smelling faintly of faeces. It was poorly lit, but where there was light, it fell from above in distinct blue rays, and as he moved under them his body flickered in and out of focus. In the far corner he had a makeshift kitchen—a ceramic pot wearing mildew, a clean towel hanging from the edge of it, a plate and a spoon positioned neatly in parallel. Facing that, something I assumed was his bedroom—torn blankets and flat leaves and a knitted hat stuffed with some type of foliage.

He told me about his wife—Clara? Claudia? Claire?—and the trips they had been on before they started their family. Driving east to west along Route 66 in a car they had stolen from a New York sidewalk, of hiking the snow-bitten mountains in Mongolia, four days in a Somali prison without food or water. Clara, he said, was a journalist, and the more they risked, the higher her price. They sailed a boat, completely inexperienced, from Port Morseby to Wellington; she wrote about the danger and the sleeplessness, and he took photos of sea birds, wingspans the size of a small car, and when they got to New Zealand they sold the lot to National Geographic and went out for pizza.

‘What do you do?’ he said, face flushed.

‘You must do something. How do you fill up your days?’

I tried to remember. ‘Sometimes I draw.’

‘Oh, an artist!’ The word punched me in the throat.

‘No, not an artist. Just someone who draws sometimes.’

He asked me about my drawings—what materials did I use? had I tried gouache? it wasn’t that hard, painting was easy if you knew what the shapes looked like? did I have anything I could show him? had I ever had an exhibition? did anyone buy my work?

He sipped on the tea that he had conjured from nowhere and looked me up and down (my skin burned and hissed, but it didn’t hurt). His eyes seemed iridescent, their own light source; I wasn’t sure whether I was looking directly at him. The tea cup disappeared into his bony hands and he stopped, cracked his knuckles, frowned.

In a bluestone cottage at the end of a sweeping gravel road, mum and I hung her paintings from sharp hooks. She had painted women knitting in armchairs, and men pulling dogs back from the road, and two girls running naked through a river. I hooked them all, admiring my handiwork as I went, and she followed behind me and realigned them, swapped them, changed them. Her eyes blazed, her fingers shook. When we had hung all of the paintings, we sat cross-legged in the middle of the floor with our backs together and looked at the exhibition, and she said, This is going to be amazing. But nobody came. At the end of the week she went back up to the bluestone cottage with her roll of red stickers and took down every painting, and left them in the back of her car for three months while she read New Idea and cried into her hands.

‘Oh,’ said Noel. And then he might have said, you are not your mother, or maybe I just heard an echo of the hundreds of other people who had said it.

‘I should go,’ I said. When the door closed behind me, it disappeared into the undergrowth.

In my kitchen I found an assortment of strange and wonderful food. Dave had stocked up on tea bags, ginger biscuits shaped like flowers, tiny fish in brine. They all went into a sandwich and I took my plate and my sketchbook to the balcony, where the charcoal blew away as soon as I touched it to paper. I drew petunias wearing striped pyjamas, and the pink trumpets of Linnaeus’ Heath, and a blue man standing in front of an invisible house.