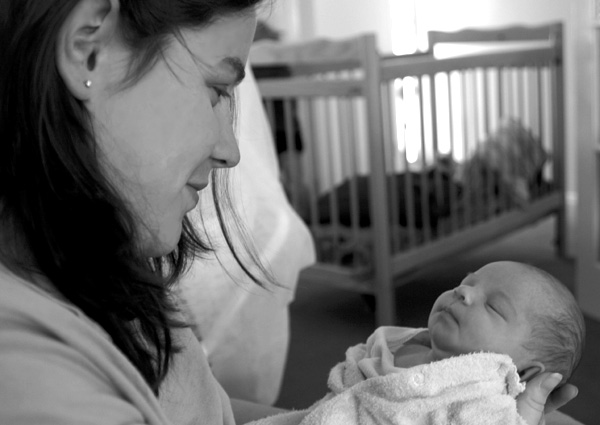 After watching the Digital Writers’ Festival session about things we’ve memorialised online, I went back and had a look through some old blog posts, starting in 2000 when I was an idiot with the world’s most terrible boyfriend.

I was just thinking today, as I am wont to do (and you’ll discover this later on, I imagine), because I got a shove in my hip and instead of being irritated by the discomfort, I thought about what was actually doing the shoving, and I thought of a teeny tiny wrinkle-soaked hand and the way you’d probably scratched me with those soft baby fingernails (and how they’ll probably smell like milk and memories).

I wanted to tell you that I know I haven’t been a very good pregnant woman this time. With our rough beginnings and all the crazy bleeding, I didn’t really let myself believe we’d ever make it more than a few weeks. Then you were making me too sick to really allow any thoughts other than “MAKE IT STOP, I HATE BEING PREGNANT” and I have to tell you, I really did feel like that at the time. But it was easy to forget how scared I’d been weeks before that, when I assumed we’d never meet. Then afterwards, when I could finally keep a meal down, you split my pelvis in two and I could barely stand. It’s no secret that I wasn’t thrilled with you then, young lady. Instead of being able to marvel at the wonder and miracle of carrying a child, I found it hard to see beyond being bitter that your dad couldn’t be pregnant with you instead of me, and how it was so unfair that I had to hurt so badly.

But just now when I was sitting here, thinking about your little hands, that I realised none of this really matters much to me. I mean hey, you helped me lose ten kilos! Your big sister is asleep in her (and soon, your) cot with her enormous bottom sticking in the air and as I looked at her and my heart filled up with love for her, I wondered if you’d know that I didn’t like you much at times and if that would make you wonder if I loved you less. And I just wanted to tell you that it doesn’t mean that. I know it doesn’t mean that because from the first time I was bleeding, I was out shopping with Georgia and some other girls and I went to the bathroom and the brightest, reddest blood was on the toilet paper. It didn’t matter that I was in a shopping centre with crowds of people, I tried as hard as I could to hold your basically non-existent form in my hand and let you know that even though I was scared, and I didn’t know if I was doing the right thing, I didn’t want you to leave me, bloody tissues in hand, in the bathroom.

Even though I was unsure, I knew I wanted you to join in under the doona on a rainy Sunday night, one day, and watch network premiere movies with your beautiful daddy and your very special sister.

And later, when I was hugging the toilet with one hand and Georgia with the other hand because my vomiting terrified her, although I was crying and she was crying and no one was around to hold my hair back, there was a desperate little voice in my head reminding me that this was good, this meant you were strong. That it wasn’t about the minutes I felt sick, or the fact that I couldn’t drink milk in the morning, but that you were hanging in there, you’d felt me thinking of you at night because I couldn’t bring myself to think that it was going to be okay during the day, and you’d heard me telling you about all the people who were waiting to hold you and love you (and especially that there was a piece of me that already did love you, but I was just scared).

And now, in this 38th week of pregnancy, with the sorest of backs and the most rundown feeling just encapsulating me, I feel compelled to tell you all of this, because I’ve only just realised that you’re nearly here, and that I’ve gone whole weeks without making sure you realise that I love you right up to the moon and back, and that if I were my mum, I’d be pretty annoyed by that. But I would go through another nine months of all the same rubbish if I had to, to be able to hold you and tell you all of this to your sweet face.

Soon. You don’t have to hold out on us any longer, tiny girl, I just had to let you know while I was still the only one who knew you well enough to know these things. But I didn’t know how until today.

Love from your silly mum.