Things that make me think of places: blue tongue lizards 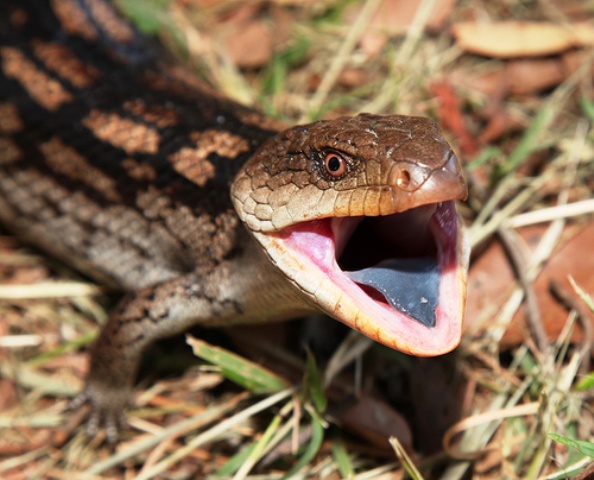 Things that make me think of places: blue tongue lizards

Years ago, before I had children but after The Big Event, I lived in a share house in an inner suburb of Melbourne. I had never lived in a house on my own. Not really. There was a month (a month? three months?) in a bungalow in Elsternwick, where I slept mostly on a mattress in the living room, and primarily with my tongue down a boy’s throat, but other than that someone had always accommodated me. I had moved out of my parents’ house, into my grandparents’ house, around and around until I had landed back at my parents’ house without a hint of remorse and they put me up on the sofa bed, which was like a bit of metal with fabric scraps on it. My bedroom had been turned into a study.

We had found the house it on the internet, and although only one of us had any employment to speak of, we went in my friend’s Pulsar to the estate agent to put in our application. It was my dream house, and I would have done anything to live there. I’m certain this had almost nothing to do with my recently-ex-boyfriend living in the next street. Stalking distance.

Having not lived properly on my own, ever (when I lived in a Sydney flat “with my dad” (who was there once a week) I spent my money on Maltesers and video games, and in the mornings I took my hangover to work and we thought about what else we might buy, and dad paid my rent and bought me a glass-topped table where I sat and played Nintendo 64), I didn’t know what it was like to move into a house. I think part of me thought that when I got there, when I pushed the key into the lock, the furniture would materialise. That when I swung the door open, the electricity would be on. Someone must have organised that already. Someone at the real estate agents would have set that up for me.

We rounded up two strangers for housemates, and the cute one got the room at the front that overlooked the Yarra. It had a sunroom that hung off the side like an ear, and he brewed beer in it and cute girls came and sat in it, and on Friday nights we all squeezed in and listened to him play guitar.

The other housemate had a room off the hallway. If I try to draw a floor plan of the house now, I can’t find this room, but I’m sure he was there. Mostly sure. I don’t know how long he lived there, but after he left the room became a place to store junk and trade white powder for money. I didn’t even notice when he left; just that the room was empty.

I had the whole extension to myself: one big room with an unfinished wall in the middle, and a green bathroom with no windows, where mould climbed up and around and on to the roof, and possums gnawed at it while I pretended to sleep. On Sundays my parents gave me fifty bucks and we drove in the Pulsar to buy a pouch of tobacco, a loaf of bread and a block of cheese.

At the front of the house was a long window with a deep sill, where we smoked and watched Oprah. Rolling tobacco into tight maggots. Pinching the end to save the rest. The pouch would last all week, if we were sensible. We tapped ash into beer bottles, into pizza boxes, on to a pile outside the window. The porch sagged in the middle, as though a giant had stood on it.

One weekend we went in to the city to see a band play. It was my friend’s brother’s band, and they’d come over from Adelaide for this gig. We drank some beers and ate some parmas and they came back to the house and sat in the window. Our heads filled up with needles. The cute housemate came out to shout at us: “I’ve got fucking work tomorrow!” so we went out to the street and found a shopping trolley and pushed each other along the road and the purebred dogs all barked at us until we tipped over into the gutter and someone cut his head open and he was shouting, spinning around in the street and shouting and someone had a trumpet and they stood in the rain and played it and the guy with his head cut open punched a car window and we were showered with safety glass.

After that, the cute housemate moved out, and I moved into the front room. I sat in the sunroom like an ear on my own and wrote letters to my boyfriend while he was at work. I bought a mouse, watched it in its metal prison, fed it bits of carrot and paper. After a few days my cat knocked the cage to the floor and I found the mouse in two pieces under my pillow.

The pouch only lasted three days that week. When I moved out, I found a blue tongue lizard cooked flat in the grill tray.

things that make me think of places