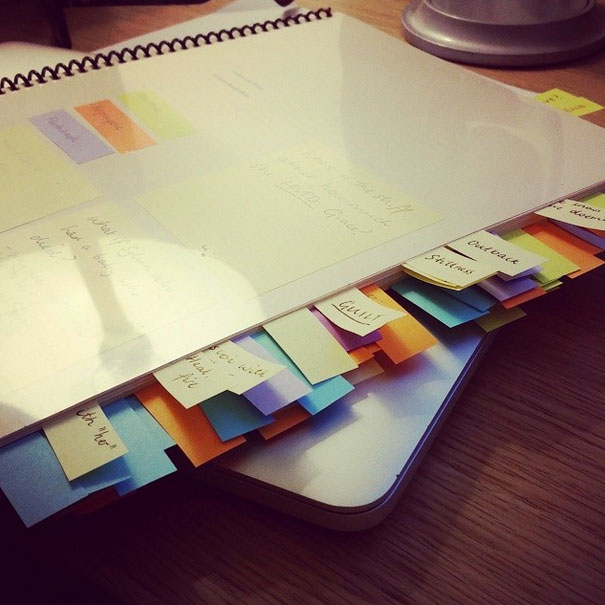 I am waist-deep in structural edits at the moment, which is to say that I’ve bought every colour of Post-It in existence, watched three movies about writing (Stuck in Love, The Words, Being Flynn), sent quite a few emails to my dad and “tried” the new Cadbury Strawberries & Creme flavour. Constantly.

Before I wrote a book, and before I had clever clogs to tell me what happens when you do that, I didn’t know that there were different kinds of edits. The only one I really knew of was the Make It Better Edit, and I’ve written before about how I kind of just assumed that was about word choice. You know, look at a sentence, think about which words are good, take out the ones that aren’t, voila! book.

Because you are savvier than me, you won’t be surprised to know that’s not how it works. Or that after rewriting a book three times, there is still work to do.

1. Don’t beat yourself up about it

After a manuscript has been contracted to be published, some poor bastard has to figure out how it can be better. Then, this poor bastard has to go back to the elated, joyous author and tell her where she’s veered off the road. And maybe she’s just hit a pothole and can get right back on, or maybe she has plummeted into a ravine and killed everyone she loves.

The author then takes this information and beats herself into a kind of pulpy mess, after which she lies in a ditch and hopes that someone will find her and that they have a defibrillator.

Having been revived and taped into some semblance of her former self, the author sits in front of her manuscript and does this:

But: unless your editor has been assigned to you because of revenge killing, he or she wants your book to be the very best book you can put out. Give yourself a few days to think about giving up writing forever, and then find the constructive bits that sing to you.

I have the most lovely editor, and she says the most lovely things. I got her notes back and asked someone else to read them in case I had gone blind and was just reading the inside of my ruined corneas. But even so, even with constructive feedback and great ideas and very kind words, you open your computer and there is this document staring back at you and if you’re honest, you can barely remember writing it.

I have never much liked the middle of my book. It sort of reads as though I went to the set of The Bold and the Beautiful, spiked their drinks with downers, told them their mothers had died and then made it into a Vine. It is weak in parts, rushed in others, and it ends in a climax that is neither believable nor especially profound.

What the structural edit notes have given me is not a solution for my saggy middle, but suggestions for how the story overall might be improved. My job is to apply the suggestions that resonate with me to these extra winter kilos and come out with a stronger story.

A structural edit is (mostly) not someone telling you how to fix your book. It might have broad suggestions, and it might have specific suggestions, but it will probably not say “you have to take out this person because her hair is bad.” I suppose maybe if it’s a kind of hairdressing sub-genre.

3. They are a two-way conversation

After I had digested my edit notes, turned my manuscript into an illegible rainbow and bought sixteen pastries, I had a phone conversation with my editor. I asked these kinds of questions:

The last one was important for me to know. I had imagined being sent to the publisher’s office for a lashing, because I’d changed the story and now they hated the story and also I would be condemned to The Author Blacklist.

Turns out, that’s not how it works. I mean, if you drop werewolves in where previously there were none, then maybe. But — and this is the craziest thing — the author writes the book. So you can take out your chapters and smash in your characters’ heads and send the thing through the shredder and that’s okay. That’s what a structural edit is for.

You don’t have to go away with your notes and not come back until you have a fully revised book. If you’re not sure about an idea you’re having, you can ask. I know!

I mean, force it a little bit. You’re probably working to a deadline, after all. But in my experience, staring at the words while punching yourself in the face is not the way to draw out your best work. Let it sit with you a while. Romance it. Invite it in. You’ve got time.

See everything else I’ve been learning about writing »