Book review: We Are Called to Rise – Anna Spargo-Ryan

Book review: We Are Called to Rise 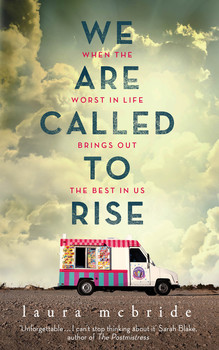 Book review: We Are Called to Rise

With thanks to Bookworld for sending me this tale. Buy their books you guys! I’m reading this right now.

We Are Called to Rise calls itself “a story about a child’s fate”, and that is the crux of it. Told from the perspective of four people, in that not-linked-yet-but-you-know-they-will-be-because-otherwise-why-would-they-even-all-be-in-this-book way, it is ostensibly about the different ways that different people are affected by conflict, grief and unrest.

It was strong out of the gate. The writing is excellent and the character development — especially of Bakshim, the “child” to whom the “child’s fate” refers — is solid. McBride begins her tale with distinct character voices and strong story hooks. I had read about forty pages when someone told me this was “their favourite book ever“. So, you know, I was settling in for something significant.

My thought as it applies to all books is that four narrators is too many, and I do think this book was weakened by having so many points of view. Bakshim’s chapters are easily the strongest, though the voice seemed a bit off to me, in places, for an eight-year-old (The Eye of the Sheep was truer, I thought). He is a sweet, naive boy and I truly felt for him from beginning to end. Our friend Luis, injured in Iraq, gives a believable and moving insight into finding the courage to go on with life. Avis is passive and unlikeable. Roberta is absent and unnecessary.

And the setup is obvious (little boy with Albanian parents, former soldier-turned-cop, injured soldier-with-empathy, woman involved in child protection). I felt as though McBride was being deliberately coy in unfolding the story the way she did. I found myself shouting at the book, because I am an insane person: “We know they’re going to have to face something together. Just tell us what it is!” and then eating great handfuls of biscuits while watching The Tonight Show with Jimmy Fallon.

Look at this cover though. Beautiful, right?

I was about a third of the way through when I realised that the character voices had begun to sound the same. On reflection, I wonder a little whether this was a deliberate choice by the author, whether she was using this technique to illustrate how people come together in times of crisis. But I suspect not. Then I reached the second “Roberta” chapter and realised I’d forgotten who Roberta was, so had to go back and find out. I began to flounder a little, to feel myself floating out to sea.

The chapter of The Main Event is shocking. And sad. And a fine commentary on race and religion as it is perceived in western societies. But it’s followed by inaction, which I found very frustrating. I kept turning pages in search of the fallout. Even Luis glosses over his recovery process in favour of reflection and musings.

Sometimes books like this end in glorious, theatrical climaxes. The reason for all the players becomes obvious, and we are rewarded for going with them in their separate threads. This one doesn’t. I threw the book. I had to be consoled with back rubs and The Grand Budapest Hotel. I don’t like to throw around grand disdain, but this is simply the worst ending I have read all year.

And yet, here I am giving it three-and-a-half stars. That’s because it contains great writing, and important social reflection, and things about stuff that people should know, and it doesn’t trivialise any of it. It is a fine book and a decent read, if you just stop thirty pages before the end.