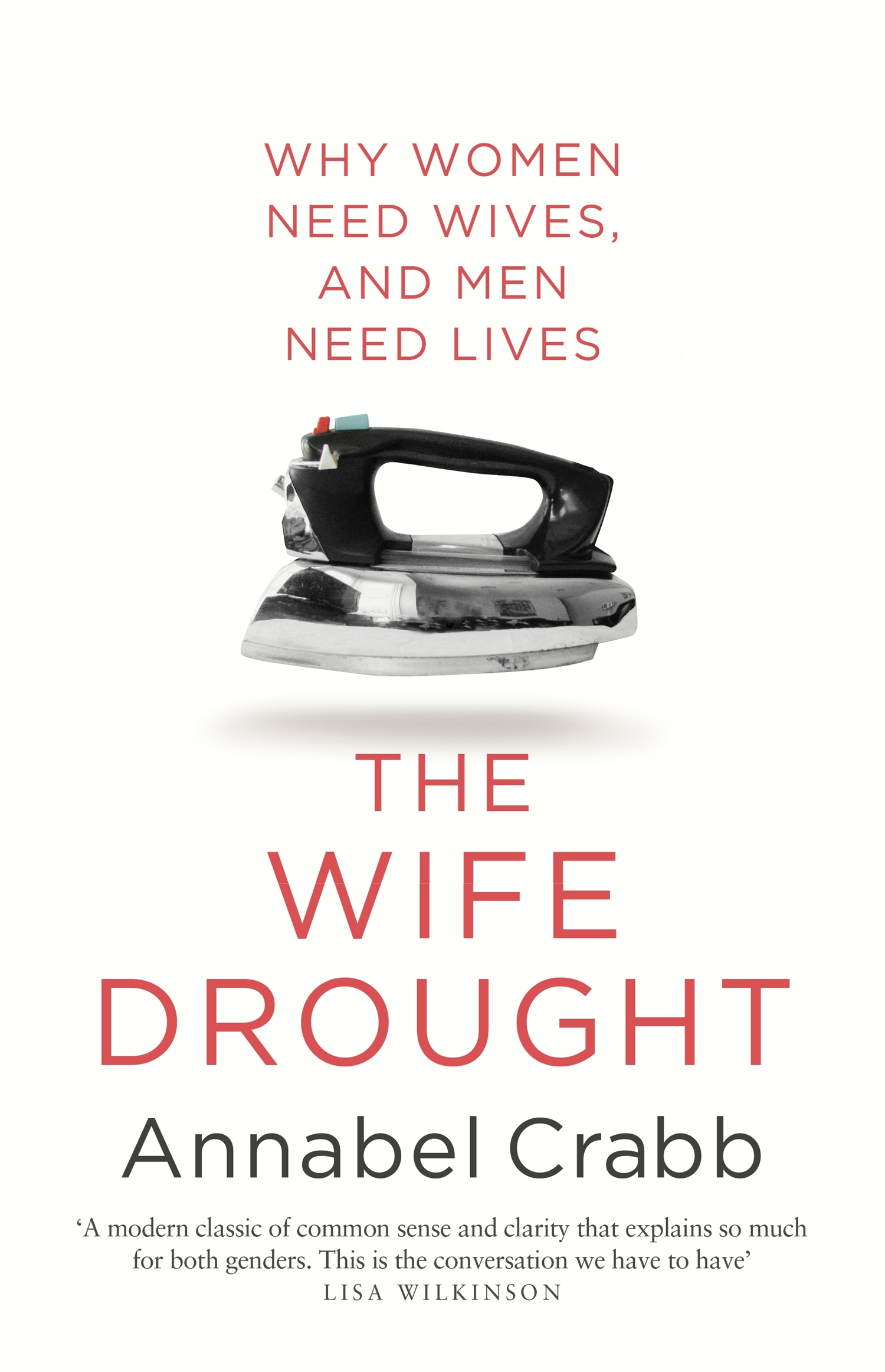 When I was a new parent, I had a “wife”. Lily was a little baby, and I worked for myself full-time. I was 23 and I was tired for every waking moment, and all the times in between. My then-husband worked on Saturday nights, but otherwise his role was to undertake parental duties while I worked. I had an office away from the house, but I also worked from home sometimes.

I clearly remember the tightness in my chest when working from home. I had a study at the other end of the hallway, and I would head in there before the kids woke up and close the door behind me. For an hour or so, it was blissful. I worked in quiet and solitude. In those minutes, I felt organised and legitimate. A real person with a real job.

Once the kids were up, and my morning hellos were done, it was my husband’s (“wife’s”) job to do kid stuff. Play with them, feed them, clean them. For all intents and purposes, I was “at work”, even when I wasn’t at my office. As the sole breadwinner — one with irregular income — it was fairly important that I be allowed to get on with it.

It never worked like that. By 10am the kids would be in my study, screaming and crying, and my husband would be on the couch, shouting to me that they needed one thing or another. Most days I would end up working into the night, just to catch up on the work I didn’t get to do during the day because I was working and parenting at the same time. And, frankly, doing neither one well.

I’ll let you figure out why this person is my former husband.

This is the crux of Annabel Crabb’s new book, The Wife Drought.

In it, she ponders the gift that is a “wife”. Someone who can take care of everything, while the other partner just worries about what they have to do. Days on end of just wandering from task to task, getting on with it, never once being struck by, “Forgot to give the kids their lunch” or “So much cleaning to do when I get home”.

Crabb is not suggesting that only women can be “wives”. The stats are, though. Of a study between firms like Deloitte, Goldman Sachs and IBM, she says:

Which is to say:

Men get wives, and women don’t.

The figures in this book are, frankly, appalling. Page after page of men who don’t just do nothing, but actually don’t know how to do it. Men who are CEOs, smart men, who can’t figure out how to book childcare. Scratch that — who don’t care enough to learn how.

For many modern mothers, progress at work means the privilege of working herself into the ground in two places rather than one.

But what about the barriers that make it hard for men to get out of the workplace? What about the glass fire escapes?

Crabb talks at some length about how difficult it is for men to attain the same flexible work life as women. She talks to a couple of men who take time away from work to be with their children (for example, taking them to school twice a week), and how much flak they cop from their employers.

In fact, patterns of mistreatment … was much more to do with how closely workers confirmed to traditional expectations of them, much more than it was to do with gender.

At about this stage of the book, I began to feel less “men suck! women rule!” and a bit more “everyone complains always about everything!” For a period I worked 8am-2pm, and on another occasion negotiated to work 3 1/2 days, and I am more inclined to believe that this is a managerial and corporate issue, rather than a gendered one. Yes, there is stigma around being a man who is seen to be doing “unmanly” things like child rearing (gross!), but where there are questions of productivity, of pulling one’s weight, of diminishing profits, these concerns are applied to all genders.

When I was in my early 20s and interviewing for jobs, I didn’t mention my kids. I looked younger than I was, and recognised that most would not assume I had children or planned to. As I got older — and my kids got older — I began to tell potential employers about my children, with a deliberate purpose. I wanted them to know that although I was of a child-bearing age (~30), I had already had my babies and, miracle notwithstanding, I would not be hitting them up for maternity leave. “My children, yes. They are almost in high school! ha-ha.” Subtle, right?

My experience is probably an exception — especially given that I took maternity leave before I ever had a career to go back to — but it does speak to the dance that is “prove you can be an employee and a parent”. There is little doubt, though — anecdotally and as evidenced by the research in Crabb’s book — that this is primarily a concern of women. That if a mother has to leave early because the kids are sick, she is “the unreliable mother”; if the father does it (and Crabb suggests he almost certainly won’t), he’s one part hero and one part laughing stock. Never a pariah, though. He wouldn’t do it, except that his wife is letting the team down by being on a work trip.

In an average Australian family, a woman will commonly behave like a housewife even if she isn’t one. And a man will behave as though he’s married to a housewife, even when he isn’t.

And this is all true. Of course it is. Women are getting the bum end of the deal. Women have to fight harder, longer and for less gain. Our society, in its current function, does not promote the stay-at-homeness of men. No man-wives here.

But do the men (and women, for the sake of argument, but the book is clear that this means mostly men) have any desire to know what it is like to be a “wife”? Of the profound exhaustion? Of the lack of time and space? Of the desire to occasionally chuck it all and let someone else worry about it? If they’re not doing it themselves, how can they possibly understand the sheer debilitation?

And more importantly, would reading this book make them want to do that? If my partner reads this book, will he have a new desire to book childcare?

I suspect not. For starters, are men who already have a “wife” going to read this book? At best, they might confuse it with a reality TV show. As the book itself describes, these are people who are blissfully unaware of how little is required of them. It won’t apply to them. Or, it’s not up to them. Or, it’s the way it’s always been. Or, their wife likes doing it. Or, they can’t read. Whatever the reason, this is a book targeting women. And we already know that we’re tired.

I was raised by a career woman, as they were known back then. She had three small children, and on any given day she lectured in law, did actual law practice (including court), fed us, clothed us, got us to school, got us home from school, bathed us and put us to bed. That must have left very little time to love us, but she did that too.

My dad also worked full-time, and often interstate. His role was to come home and play with us on weekends, read stories to us and generally be the fun, occasionally mysterious parent. Though their workloads were comparable, their contributions were quite different.

Also, my dad is a management consultant. A good one, no doubt. But my mum is one of ten women chairing ASX200 boards in Australia. So, you know.

As a result, I have grown into adulthood (and my own parenthood) in constant fear of being The Person Everything Falls To. And it does. School runs. Kids with lice. Making sure dance classes are paid for. Stocking the cupboards with lunch stuff. Taking back excursion notices. Remembering parent-teacher interviews. I work 60-80 hours a week and am by far the least organised of the three of us, but it falls to me anyway. Me, who earns more than both my partner and my ex-husband put together. I am still the “wife”.

Overall, I found The Wife Drought to be a jolly good insight, based on things we kind of know already. For the first quarter of the book, I just felt stressed. Like, “Jesus Annabel! I have to read this and then I have to go and actually live this tomorrow? Pass the Nicholas Sparks!” The challenges of which she speaks are the cold reality for so many women, day in and day out.

It is acutely resonant, and that is both its strength and its weakness. Crabb is, in many ways, preaching to the choir. Which is, of course, the complaint of many with regards to feminism in this country. We know it’s shite. Stop telling us it’s shite. Mobilise the squadrons to make it less shite. And I’m not sure that this book does anything more than anger wives and reinforce what we already know.

Having said that though, it is packed with interesting anecdotes and solid research to support this “what we already know” stuff. Her writing is charming and light, sometimes belying the legitimately devastating content. This is a quick and easy — if not enjoyable, exactly — read.

But oh, for a wife. Which isn’t to say, Oh, for a woman to whom everything falls, because that’s not a wife, nor is it the point of Crabb’s book. A wife might be a man or a woman. But to be able to go about the day without the weight of guilt, of disorganisation, of expectation, of dinner or washing or cleaning. Well. Imagine what more we could get done.