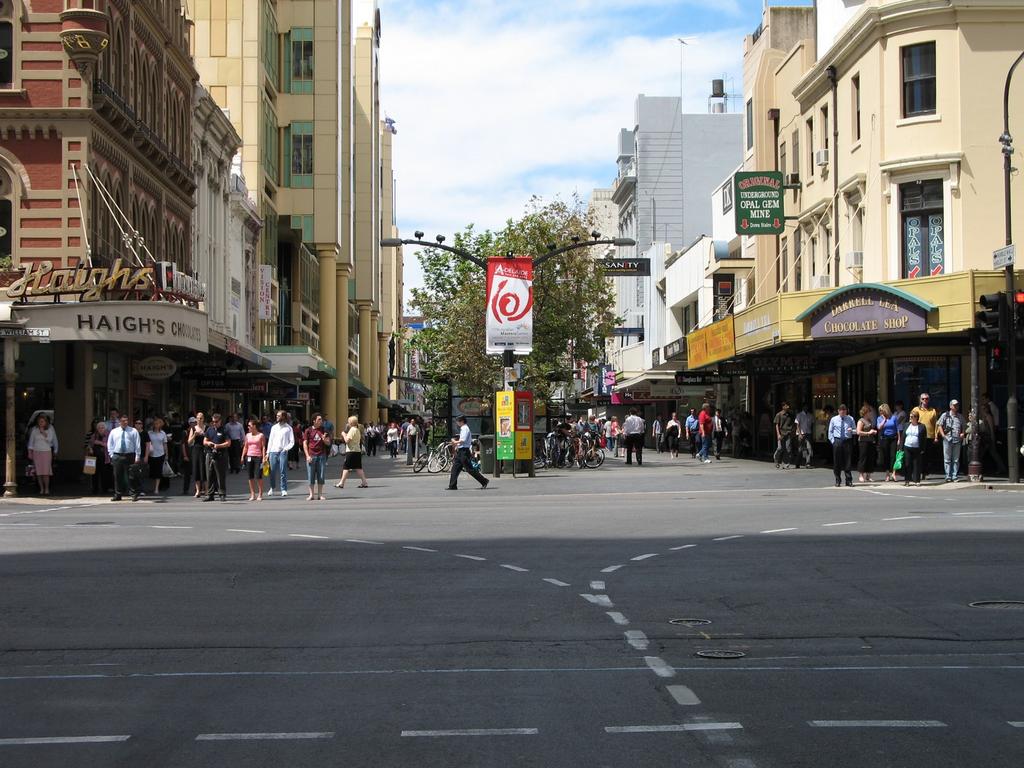 For the first seventeen years of my life, I hung around in a very nice part of the world called the City of Burnside. I was born in Burnside Hospital, and for seventeen years never lived more than three kilometres away from it. My friends were down the road, around the corner. For ten years I walked to the very same pizza shop, the very same deli, the very same fruit shop. At the fruit shop they had apricot bars dipped in chocolate and they were seven for $2, and for ten years I bought fistfuls of them and ate them at the very same park. I love Fruchocs and Haigh’s and Balfour’s custard tarts and Vili’s chicken pies and people who pronounce it as “dahnce”, and the Norwood Oval and Coopers Pale Ale and buying rambutans at the Central Market and catching the O-bahn bus.

I’ve lived in Melbourne since 2000, when mum moved here for work, and yet in 2014 I still feel profoundly homesick. I poke around Melbourne, I eat its delicious breakfasts and go to its wonderful festivals and cheer at its frequent football. My children were born here, in a hospital just down the road from here, same as I was. But I have never managed to make an emotional connection to it. Not for one solitary minute. I am a long-term angry tourist, like I’ve been sent on a camp I hate forever.

Not long after I moved to Melbourne, I hit a brick wall of anxiety. Acute paranoia. Paralysing, devastating fear. I bound myself up in my house and I did not come out for three months. I didn’t go to the bakery, let alone Adelaide. And I thought about it nearly every day, the way it seemed torn out from under me (no matter how untrue).

When Georgia was a baby, in the weeks before Michael and I got married, I had a sudden attack of bravery/valium and boarded a plane for Adelaide. We arrived first thing in the morning, and I hugged myself undercover at the airport and chain smoked until my brain was numb. A (white) taxi drove us past the places I knew, the places I yearned and ached for. My memories were clear: I was seven years old and choking on a boiled lolly at the Pancake Parlour; I was ten years old and buying potted flowers on The Parade; I was fourteen years old and still tasting the hot chips from the corner shop. It was surreal–unfamiliar and resonant all at once. I was in a place I knew everything about, and yet I was strung in the air like a marionette. An observer. An impostor.

At my grandmother’s house, which looked and smelled and grumbled exactly the same, I hid inside her floral couch and thought about screaming. The displacement was so disarming that for hours I couldn’t open my eyes. But as the hours went by I felt more settled than I had in years, and by the end of the three days, I had the familiar pang of leaving home.

We didn’t, though. That was eleven years ago and I never have, not once. As the time has passed, it has become less a place I used to live and more a town from a storybook, with places and people conjured from my naive brain. Big skies and small ponds and blessed peace and quiet. In my muddledness, going to Adelaide would require travelling through a wormhole, or walking into a book Gumby style. I don’t even know what place it is now: what I would find if I wandered down Rundle Street; what the biscuits in Hahndorf taste like; whether the tram comes to a stop at Glenelg with the same clunk. Do they set out the Christmas trees the same as before? Do they still have a colouring competition for Easter at the Hilton? Do the cricket nets at my school still need repairing? Are the people there? Did they stay? Did they leave, like I did, and circle around for years, trying to find the door again?

I feel ridiculous for pining for a place the next town over–a day trip! I could justifiably go to Adelaide for an hour. Get on a plane, go to the Haigh’s factory, have lunch with my nanna, come back again. There are people who hate going to Adelaide. People who go there under duress and are relieved when they leave. It is nothing. Not Paris or New York or a pocket of ivy on a hillside in Wales.

Being an agoraphobic person in a familiar place is the pits. Being an agoraphobic person away from home (and frankly, it doesn’t matter how far, because some days even 500 metres may as well be a foreign country) is confounding. It’s like trying to drop anchor on a cloud. And the older I get — the more obliged to Melbourne, with my Victorian children and my Victorian house and my Victorian friends — the less I believe I will ever make it back home. If such a place even exists.