Food court meals I miss to this day – Anna Spargo-Ryan

Food court meals I miss to this day 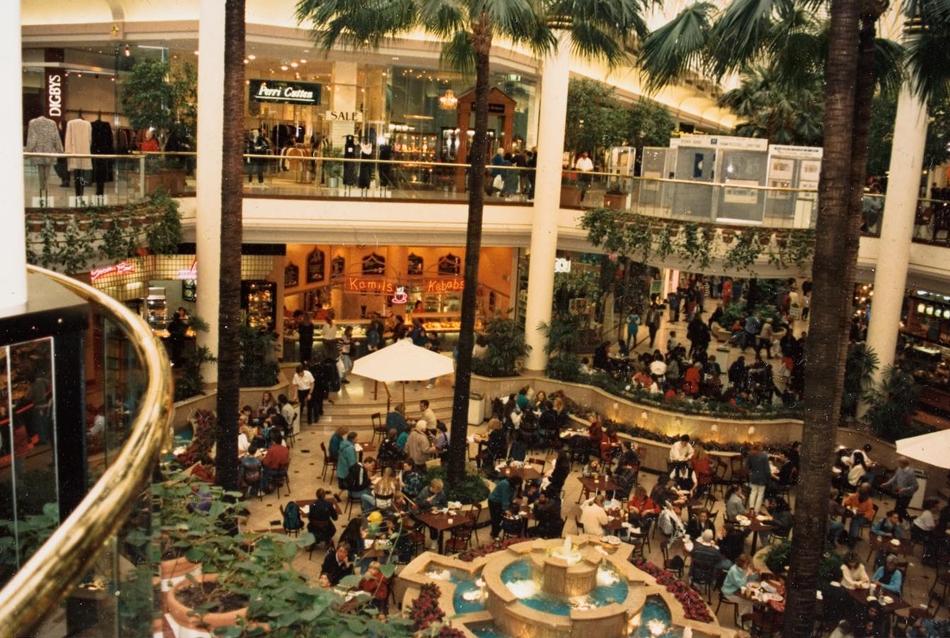 November 17, 2014 In Storytelling By Anna Spargo-Ryan

Food court meals I miss to this day

Being a 90s hoodlum and general interactor with humanity, I’ve been to a few food courts. I like the way people sit in them, as though it’s not fully disgusting to eat your one type of food with your disgusting mouth while someone sits practically on top of you with their junk in your eye. I also feel this way about restaurants, only more so because of the reusable napkins.

The one near Centrepoint

The best food court food I ever met was behind Martin Place in Sydney. I would walk to on my lunch break if I felt very energetic. Sometimes I would walk to Darling Harbour and get on the monorail because I had never lived somewhere with a monorail and it was new and exciting. This is how it happened in my memory. In reality, I suspect this might have had something to do with the reason I was later fired from that job. If indeed I had a job, and wasn’t just skulking around the corridors of National Australia Bank in search of a man with deep pockets.

Beautiful people, with which Sydney is brimming, require good food and green smoothies I think. This food court boasted ten ways to eat a salad (in a bowl, in a wrap, blended, mashed, with poached fish, wearing a top hat, upside-down, while giving birth, inside the ISS) and on my first visit I was disheartened. Salad? Fuck. I had just caught a monorail because I was a good time girl, and good time girls do not eat salad as far as I know.

Bordering on starvation fatigue — and very close to buying a salad shaped like a swan — I happened upon a happy-looking couple behind a wall of carbs. They were producing every kind of bad food a person could want: beef stroganoff, lasagne, lemon chicken, those deep-fried potatoes shaped like faces. For seven dollars they dripped me out a ladle of chicken scaloppine with four or five green beans and a juicy wad of boiled rice. I took my bit of polystyrene-encrusted heaven and sat on a brick wall and ate it with a plastic fork that had melted a little, and made audible moaning noises that frightened other members of the public but only because they were eating salad and would never experience the majesty of this curdled, salty, fatty slop. 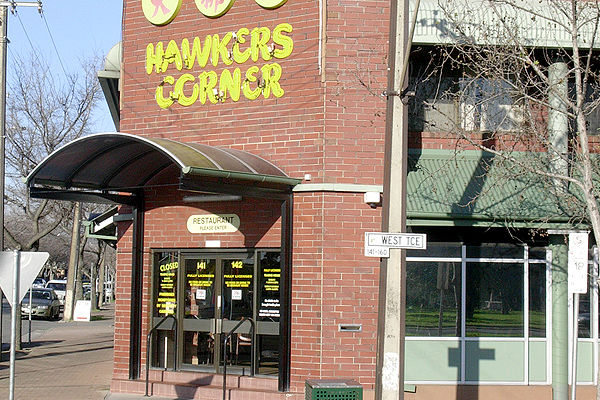 Hawkers Corner looks like the shittiest hub of food poisoning you could ever hope to avoid at all costs. It’s also opposite a cemetery. Are these two things related? Who can say. It’s an Asian-only food court, like if that one bain marie noodle place that exists in every food court had fifteen babies and they all lived inside a building near a cemetery.

We used to go there on our way to other things, like one time we went there on the way to the Royal Show, and another time we went there because my brother wanted to buy a radio-controlled car from the shop down the road. We took our plastic trays and our plastic chopsticks, and we ran around to every shop in the place as though set loose in a Thai night market, hungry for our bucket of elbow joints (beef chow mein with soft noodles).

My dad loved it. He would sit at a vinyl table in the middle of the room and watch us in action, bartering for a prawn dumpling or a miso soup from a packet. It was the happiest place in the world, until the morning when we revisited it and had to take the day off school.

When my ex-husband and I were first married, he worked at the Coles in the world’s worst Centro: Oakleigh. Being at Oakleigh Centro is like catapulting yourself into a retirement village filled with jaguars in old people costumes. They hate you, they hate each other, and they hate themselves. And fuck me, if they don’t hate Oakleigh Centro. Sometimes I would just sit outside Muffin Break and pray someone would pour molten silver into my throat, and then an old man would come up to me and say, “Why are you so fat? Do you have diabetes?” and I would tell him I had to eat my feelings on account of being in Oakleigh.

Of course, the reality about the fat thing was the Sad Man. He had an Italian servery in a food court the size of my living room. It was him, a terrible sushi place, bain marie noodles (see above) and something called The Gumnut Lounge (I may be remembering this incorrectly). He put out a mostly horrible spread of reheated pastas, filmy pizzas and dried husks of garlic bread, but he was a magician when it came to tortellini carbonara.

You know how food court pasta places always have the same tortellini carbonara? It’s a kind of shitty tray of cream and oil that isn’t thickened but just left to congeal, and the pasta is heated in a microwave and the bacon doesn’t come from a “pig” but actually from a “factory floor”, and yet somehow it is a flavour sensation? I say “somehow”, but it’s because of salt. And the Sad Man could make a bowl of salt taste better than anyone I’d ever known. He offered an entree size for $6, or a main size for $9. I was all, “I’m breastfeeding!” so I got the main size, and families of pigeons would gather around me for my scraps and there would be no scraps.

One day I went to see the Sad Man and he had a pretty young woman with him and he didn’t look sad anymore. So the furious old people of Oakleigh chased him out of town, and I had to get Wendy’s hot dogs instead and so in a way, the Sad Man lived on in me. 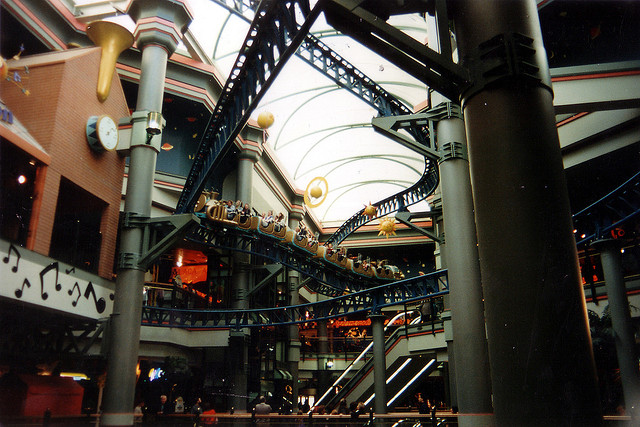 The food court in the basement of Adelaide’s Myer Centre is famous for one thing only: falling bodies. Urban legend, perhaps, but everyone knew someone who had a friend whose dad had seen them. If The Advertiser was to be believed (it definitely wasn’t), people fell from Dazzleland in their dozens, daily, hurtling down six storeys into the unsuspecting food court below and into unsuspecting dad’s chicken focaccia.

Although I never saw one myself, there was always an element of danger. On Friday afternoons, I met my boyfriend at the comic book shop, and then we ate McDonald’s together and pretended not to be just a little exhilarated by the idea of being crushed to death by another human. I didn’t really like McDonald’s, but I ordered cheeseburgers with just meat and cheese (onion? gross! pickles? gross! sauce? gross!) and my boyfriend read comics I guess, and I dreamed of ways to use the table to protect myself. Under the table? Table on the side? What was the terminal velocity of a falling body anyway?

Later I realised that people weren’t “falling” so much as “jumping”. But by then I was wearing black lipstick and listening to Fear Factory on my Discman, so my nostalgia was only heightened.

(Incidentally, if you’re not from Adelaide, watch this video. Someone installed this at the top of a shopping centre. Allegedly. It is possible that the population of Adelaide had a simultaneous hallucination.)

When I was a very little girl, my dad would take my baby brother and I to Tea Tree Plaza. I was adorable, so I called it “The Juicy Plaster” and we all laughed and my dad wore shorts and no one had been devastated by The Land Before Time yet. Sometimes we caught the O-Bahn bus, which involved driving to the misleading “Paradise Bus Interchange”, then riding a device that was not quite a bus, but not quite a train.

Tea Tree Plaza was brown, in the 80s. Everything about it was brown. The outside was brown. The inside was brown. And the Myer was brown. Dad would guide us through rows of brown porcelain and Wedgewood plates with rabbits on them and then, in my memory, we would go through a brown curtain and stand in line with a brown tray. I loved the tray part because I had to push it along a little tray track, and if I was quick I could add one of these without anyone noticing. A brown one, obviously. At the next counter, a lady we knew by name poured heat-lamp chips into a brown bowl, and added enough brown gravy to create a delicious, delicious soup.

We ate those same chips and gravy every week for what seemed like a hundred years. One day my dad had a (brown) pot of tea on the table and my brother stood up in his pram and grabbed it. The pram slipped and he covered himself in boiling water. He cried, but we fed him chips and gravy and it literally cured the second-degree burns on his arm.