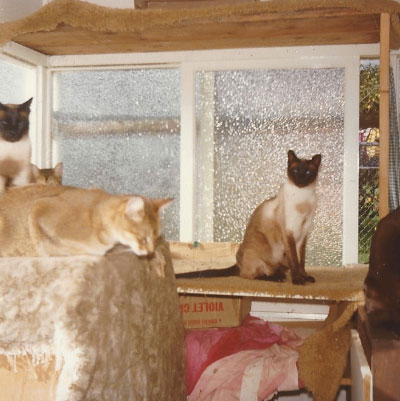 November 18, 2014 In Storytelling By Anna Spargo-Ryan

When I was but a twinkle in my father’s eye, my animal destiny was being established. I would be a hopeless devotee of the kitten mewling in the drain; I would be the freak stalking the RSPCA every weekend; I would be the girl shelling out her pocket money for a mouse that would fit in my pocket.

I have a photo of this bearded, smiling man, sitting in bed with the doona pulled up to his chin while six sets of laser eyes stare out from around him. A whole army of laser-shooting cats. Mum is presumably the photographer, capturing the majesty of the kind of happiness that can only come from the distant, unreliable love of a feline.

Dad has always had a particular fondness for foreign shorthaired cats, so that’s what he had — a collection of howling, angsty animals prowling his hallways. Good training for his later brood of teenagers, probably.

He had two Abyssinians. Two long, bony creatures like hieroglyphs. And insane. Ptolemy and Cheops were as revered as their namesakes, and they made sure everyone knew about it. Constantly. Abyssinians can often be found on top of cupboards, screeching.

And he had two Siamese: Bacara and Baluchi. One fat-faced and slow, and the other a lithe gymnast. Their names came from types of rugs. I can only assume this is because Siamese are very lazy and live mostly on the floor.

But it was the last two that began my love affair with animals: Brutus and Nero. 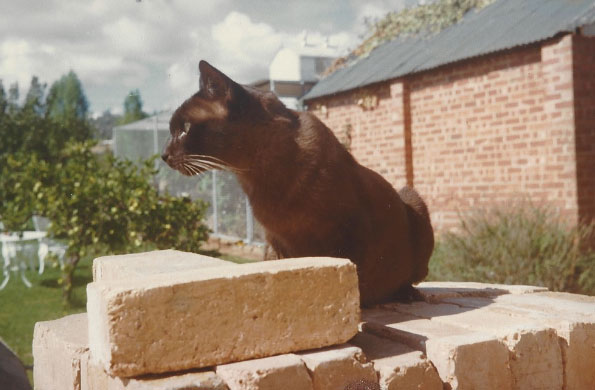 My dad said of them, ‘I would have liked to have a black panther on my mantelpiece. But in lieu of that, I’ve got Burmese.’ If you’ve never had a Burmese (and I’m sad for you, boy), know this: they are cats on the outside and dog-humanoids on the inside. They are everything a cat claims not to be: loyal, adoring, sweet. They will play fetch with you and walk around the block with you and help you make dinner. On more than one occasion I have come home to a Burmese lying atop of a doorframe, arms and legs draped to the side as though on an island holiday.

As you can imagine, our house was loud. Abyssinians cry like human babies. Siamese yowl as though being turned inside out. And Burmese are chatty old women. It was a cacophony of meows. A catophony. I’m not even sorry.

I never had a dog, as a child, and I never needed one. In our backyard we had a plane tree many storeys high (or so I remember it). In autumn it would shed its leaves all over the lawn and my dad would rake them into perfect cat-playing piles. When I think of Brutus — my friend, my pal — I smell cut grass and the mulch formed at the bottom of a fountain of dead leaves. We rolled and dived and jumped and kicked and rustled. I was three years old; I didn’t know a cat could leave me. What a thought! What a notion! Cats were toys with hearts in them.

Brutus was the last, after the others had deteriorated with kidney disease or been struck by cars. I don’t remember him dying. I remember him being there, and I remember him not being there. At some point my dad must have picked him up from the road and buried him in the backyard. Years later we sold the house, and the people who bought it dug a pool. I wondered how many little skeletons they found down there.

When I was six I found a poem in my ventricles and extracted it. Brutus the cat came around the corner; Brutus the cat jumped on to my bed; Brutus the cat purred with his throat motor. I hardly remembered him, being a child with no self-awareness, except for the way my bone marrow missed him.

Dad and his cats set me up for a lifetime of ruined couches and stolen bench food. After his feline basketball team had passed on, I took the reins. Like a modern day Noah I ploughed across town, collecting every animal I could find, pushing them into my little kid heart and knowing they would never come out again. These are their stories.

Everything I know about animals I learned from my dad