I’m nothing if not a giver. Selfless, you might say. Philanthropic. Always putting others first. That’s why I take it upon myself to try weird new chocolate spin-offs, so you don’t have to. Here are today’s contenders: 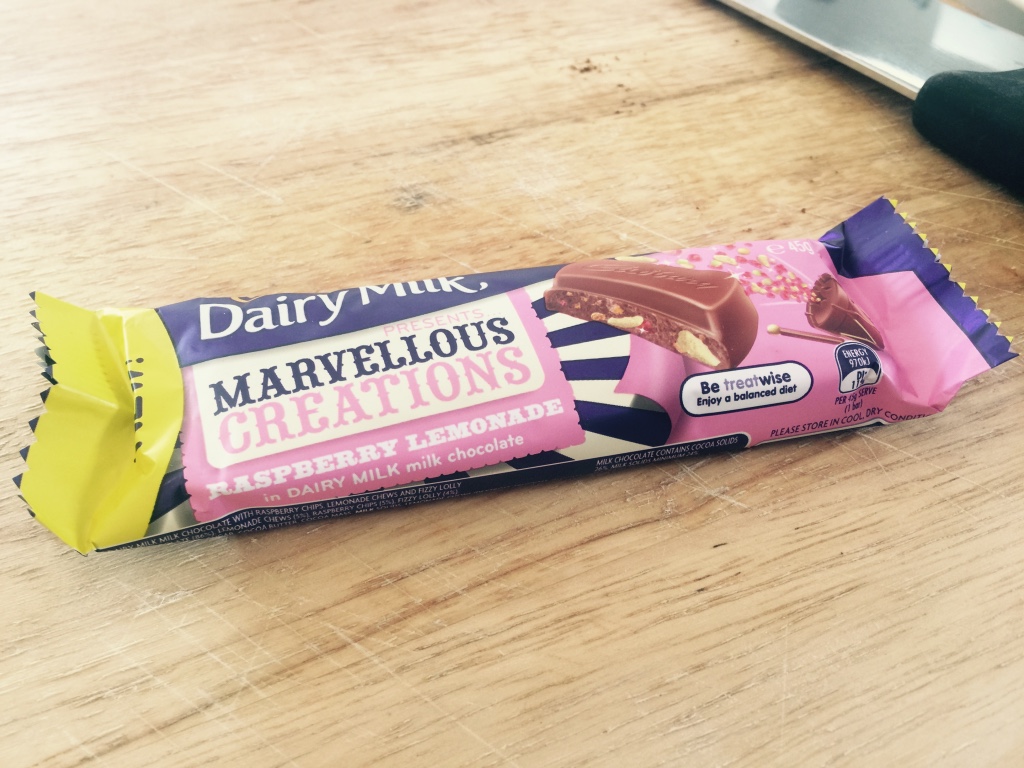 When Cadbury first released its Marvellous Creations range, they included a spectacular “Peanut Toffee Cookie” variety, which I ate like mad until they quietly pulled it. I’ve never quite forgiven them, so I approached this new bar with a modicum of broken-heartedness.

The Raspberry Lemonade version seems to contain chewy raspberry lollies, bits of caramel (?) and what I think are lemonade flavoured biscuits. I’m sure the packets used to explain this, because the fillings were so zany and people wanted to know which precise mouth party to expect. 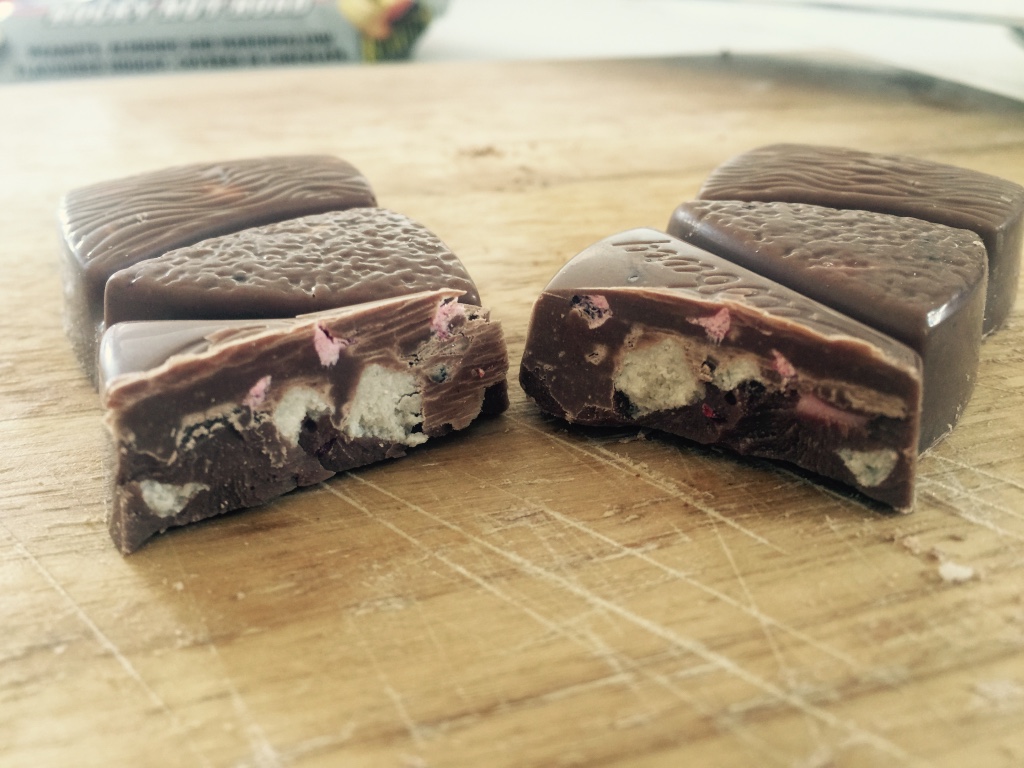 The caramel bits are hard. I had a filling done a few months ago and I’m fairly sure part of it just crawled out of my mouth and refused to come back. Also, why is there even caramel in a raspberry lemonade? I mean, I’m no expert (I’m totally an expert) but in all my years of buying that delicious Schweppes Traditional stuff, I never once saw caramel in it. This is potentially a Salted Caramel State gone mad.

There’s a strong raspberry flavour. The biscuit just tastes like a slightly stale Milk Arrowroot. The different shapes of the pieces are fancy, as always, and give the sense of being in a chocolate forest.

Verdict: Give me back my Peanut Toffee Cookie, you assholes. 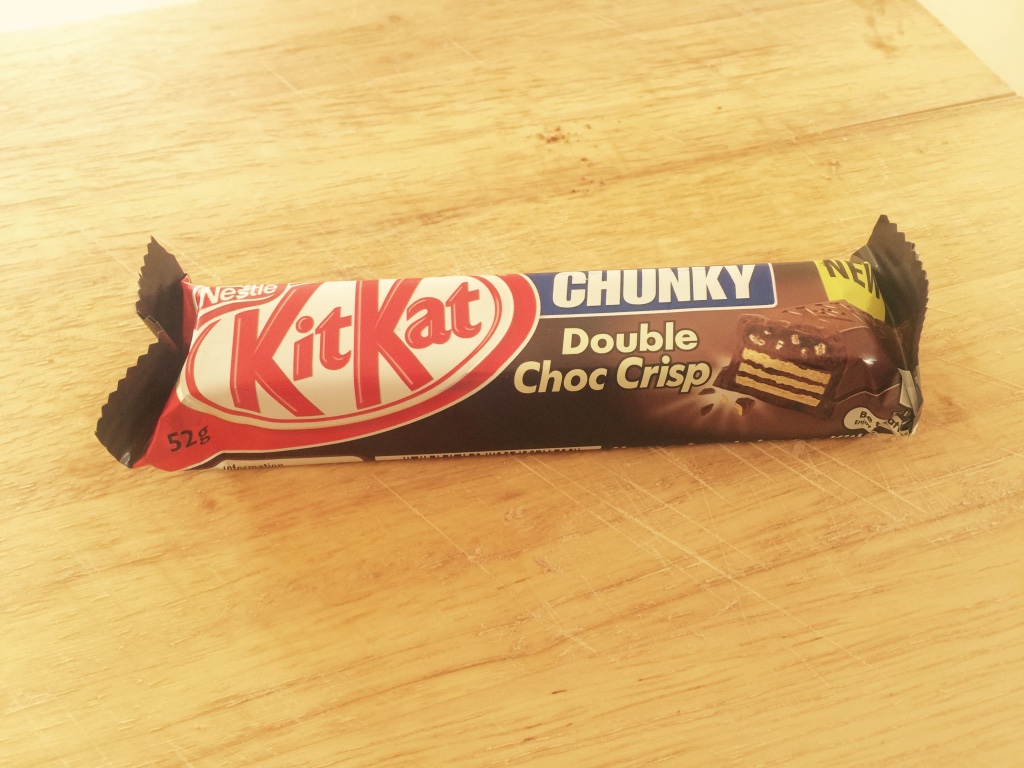 Kit Kat Chunky has never been a favourite of mine. The chocolate is too thick, and despite all the funny jokes to the contrary, it’s too big for my mouth. However, I am a long-time fan of putting rice puffs in chocolate (see: Crunch, Chokito), so I was willing to make the sacrifice.

It seems to be a regular Kit Kat Chunky, with a layer of chocolate praline (“double choc”) and a couple of Rice Bubbles (“crisp”). At least it comes with a couple of perforations, so you don’t have to break your jaw trying to bite it in half. 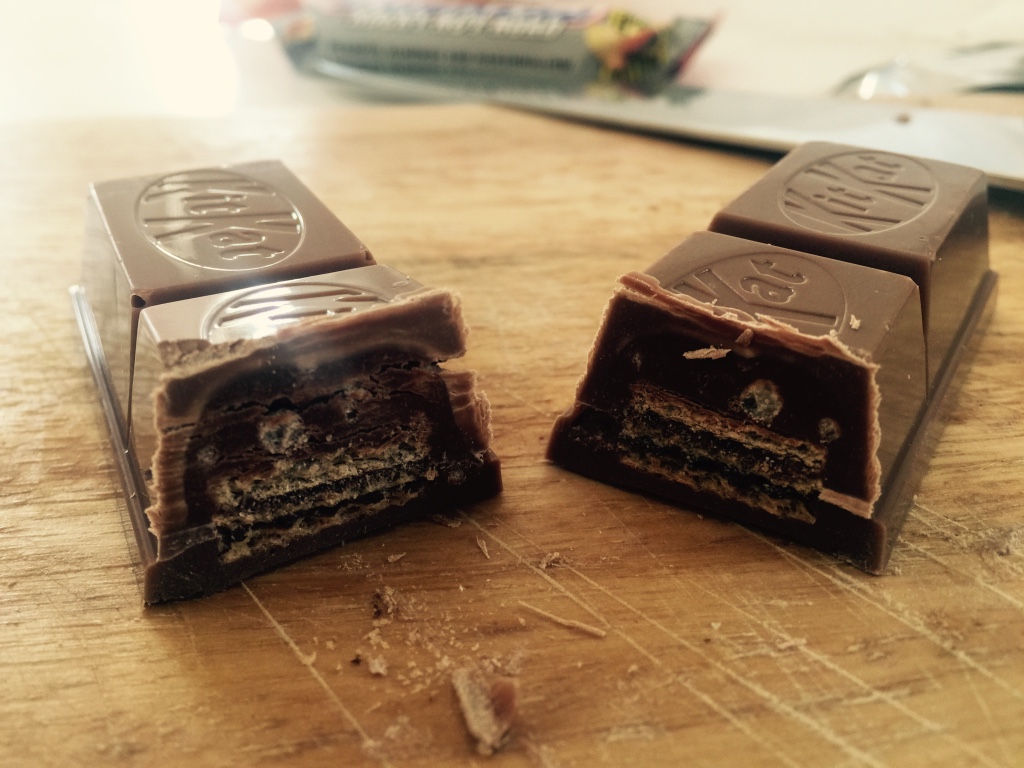 The chocolate flavour is overwhelming. For me, a Kit Kat is about the wafer inside. Nestle’s chocolate is second rate, and it’s that crunchy, flaky texture that makes the Kit Kat what it is. If I wanted to cop a mouthful of dark chocolate, I would frankly do something I can’t publish on this blog because my dad reads it. I wouldn’t bite into this, though. Dark chocolate is hard to get right and Nestle are well off the mark.

The rice puffs are little damsels in distress, lost in this sickly praline and quite possibly imaginary. 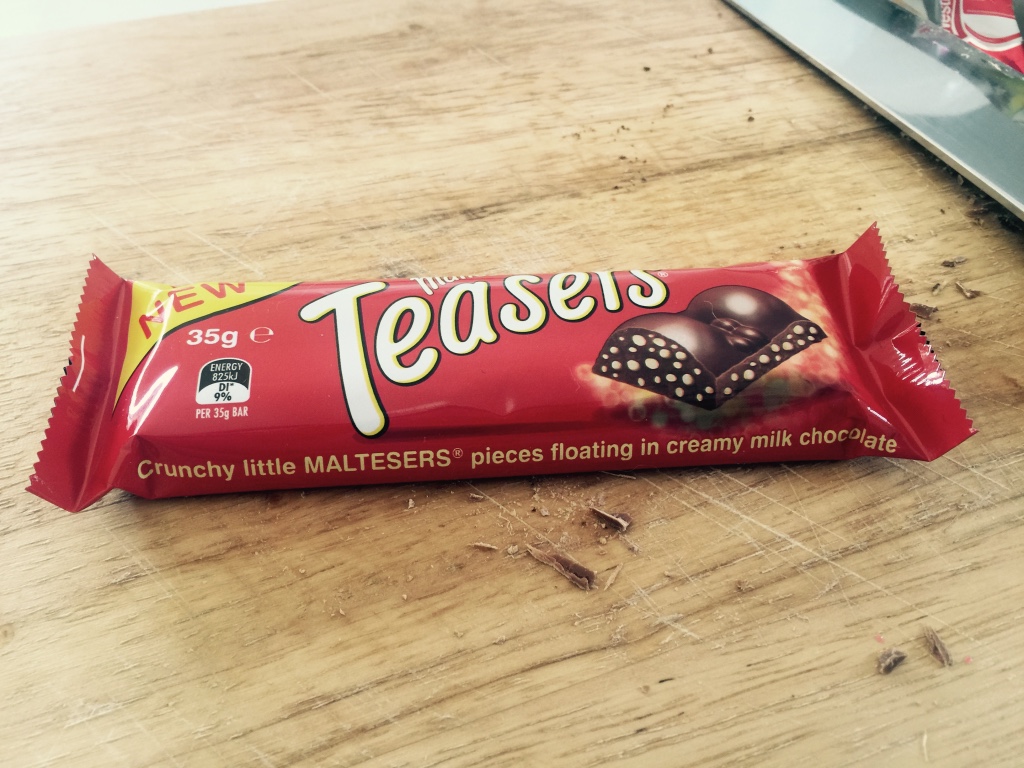 You know how everyone is always complaining about how the Easter stuff comes out too early and actually Christmas has just finished Jesus would be so angry? I’m not one of those people. Every year, Mars put out a thing called a Malteaster Bunny, which is bits of Malteser in a kind of malt flavoured praline, and it has little ears on it so you know which end to bite first. They’re a dollar. I reckon I buy about 200 between January and April. They’ve also started one called a Merryteaser Reindeer, which is dumb because why didn’t they call it a Maltcryingalonewhilemyfamilyeatstogether?

The Maltesers Teasers (these words are irritating and confusing to type) is not dissimilar. It doesn’t have the creamy stuff in the middle* but it does have little crunchy bits, and the Mars chocolate is good enough to carry it off. It’s sweet, but not too sweet, and the pieces are so tiny that they’re not only poor value for money but also easy to justify when eating all day long. 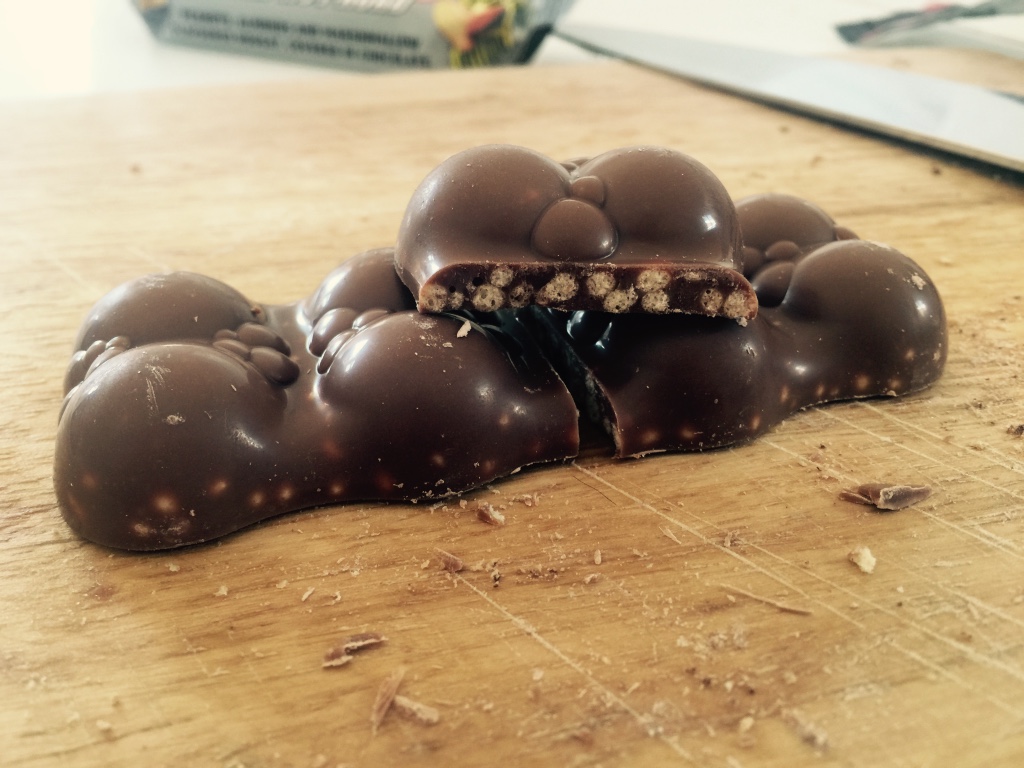 Mine came out broken and I’m not very good at jigsaws, so sorry it looks even more like a poo than normal. Also, the ad campaign for this is “10 Maltesers walk into a bar”, which delights me every time I see it.

Verdict: This is, without question, my favourite of the lot. Even better than regular Maltesers because they don’t get stuck in your teeth for 2-3 days afterwards. 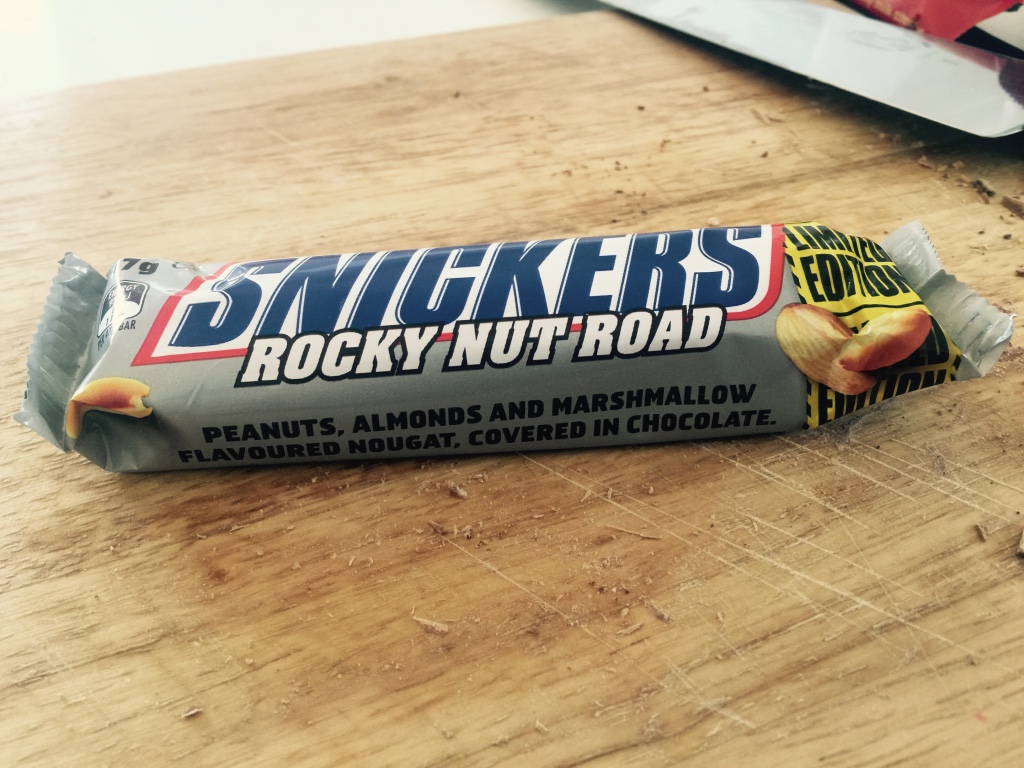 Rocky Nut Road? What does that remotely mean? Rocky Road already has nuts in it and a “Nut Road” sounds like the kind of place you’d take a curious man you just found catching a lift to Alice Springs. 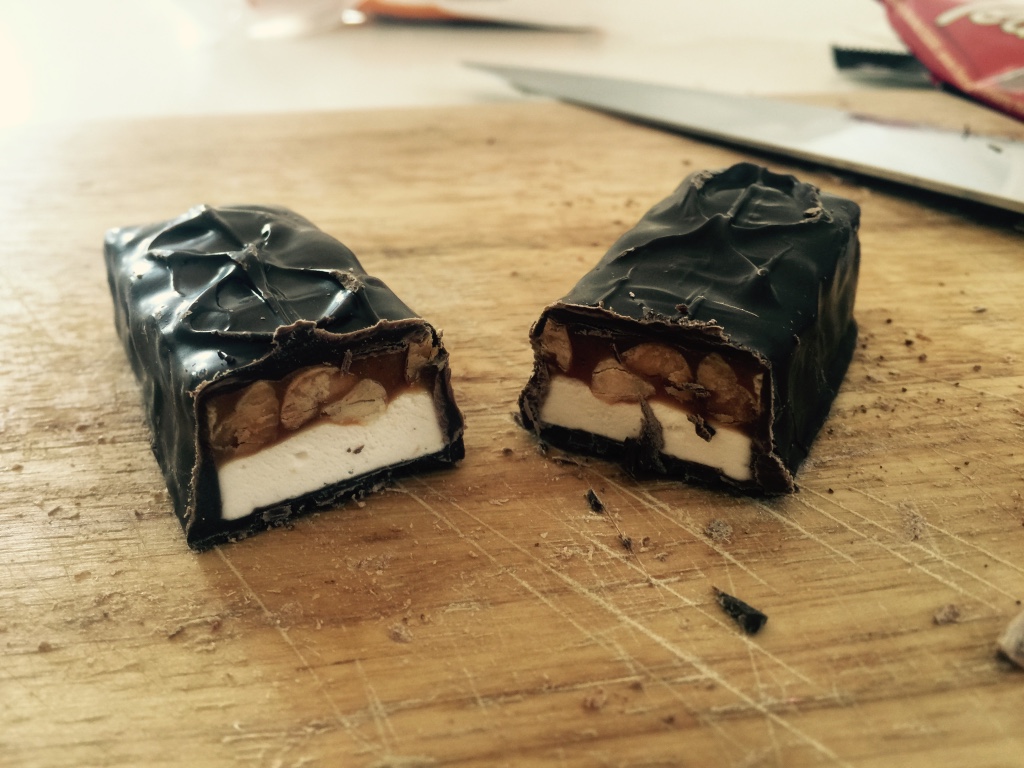 This is a regular Snickers, but with almonds as well as peanuts and “marshmallow flavoured nougat”. It looks exactly like an Almond Snickers. I’m also not sure if this is surprise dark chocolate; it’s definitely darker than the other bars, but it doesn’t mention it on the packet and it doesn’t taste quite like dark chocolate. This is a kind of maverick chocolate that’s somewhere in the middle, like Old Gold. See it compared to a Mars Bar: 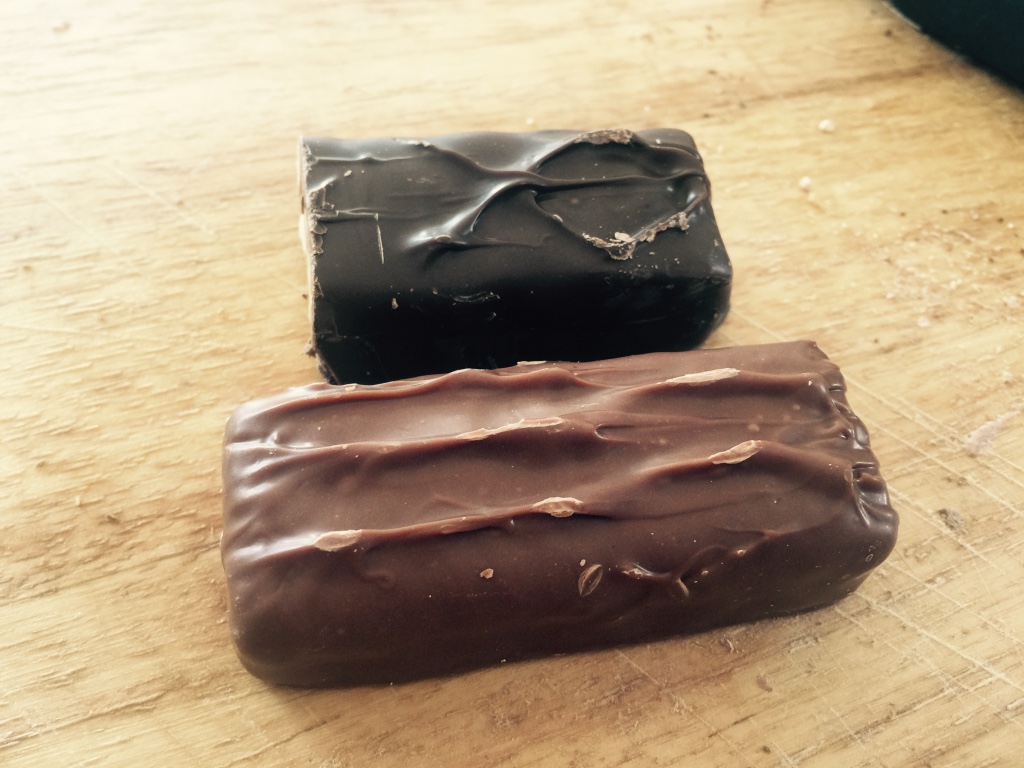 It tastes like a Snickers that fell in a bathtub. The marshmallow has a rather soapy flavour, and with the bitterness of the chocolate it’s a bit like eating chocolate at the chemist. The almonds are totally unnecessary – any nut flavour is lost to the nougat. Everything tastes like nougat. This is a bar of nougat. 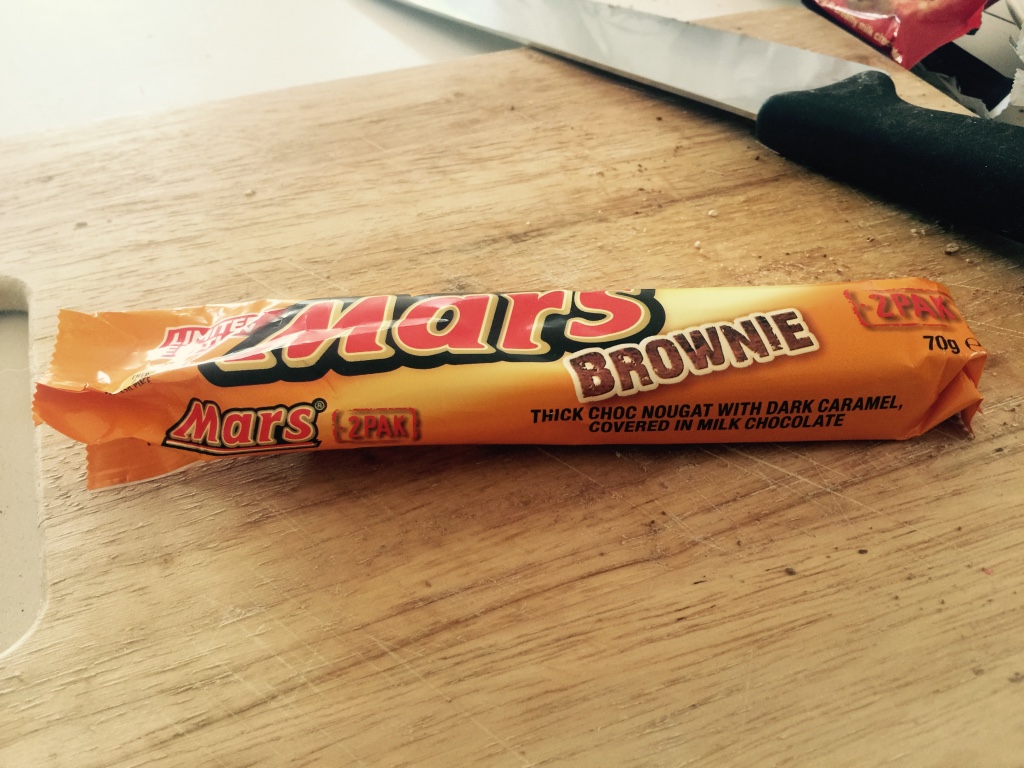 I’ve never been one for spin-off Mars Bars. I actually don’t even like regular Mars Bars very much. But you may notice that this packet has been opened. This isn’t even the first time I’ve “tried” a Mars Brownie. They are bloody great. 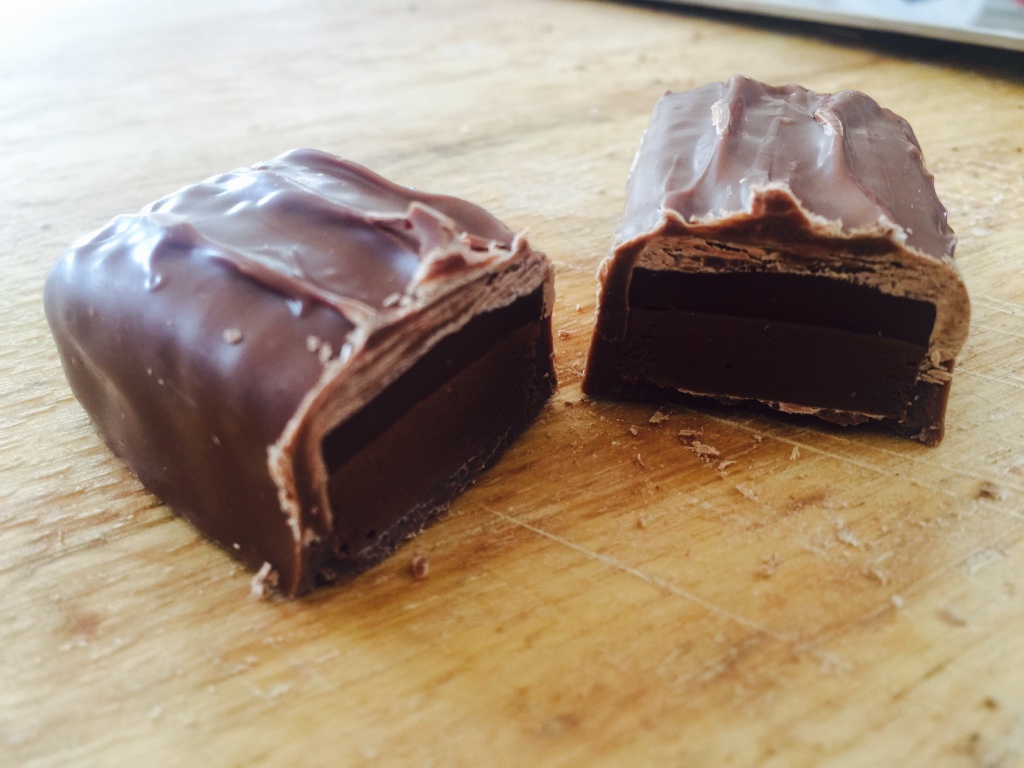 It’s constructed like a regular Mars Bar, but with darker caramel, and chocolate-flavoured nougat. It’s a lot of chocolate. I mean, you bite into it and parts of your body actually become chocolate. But unlike the disastrous Kit Kat above, there are three distinct shades of brown – milk brown, soft poo brown, mud brown – and they each have their own texture. Instead of biting into a bit of furry cocoa, this bar gives you little reprieves from top to bottom. Chocolate, caramel, nougat, chocolate.

Having said that, it is extremely sweet. It’s like sucking on a bag of sugar.

Verdict: I ate this after I’d eaten all the others on this list and I mean, my pancreas did literally shake me by the throat until I vomited.