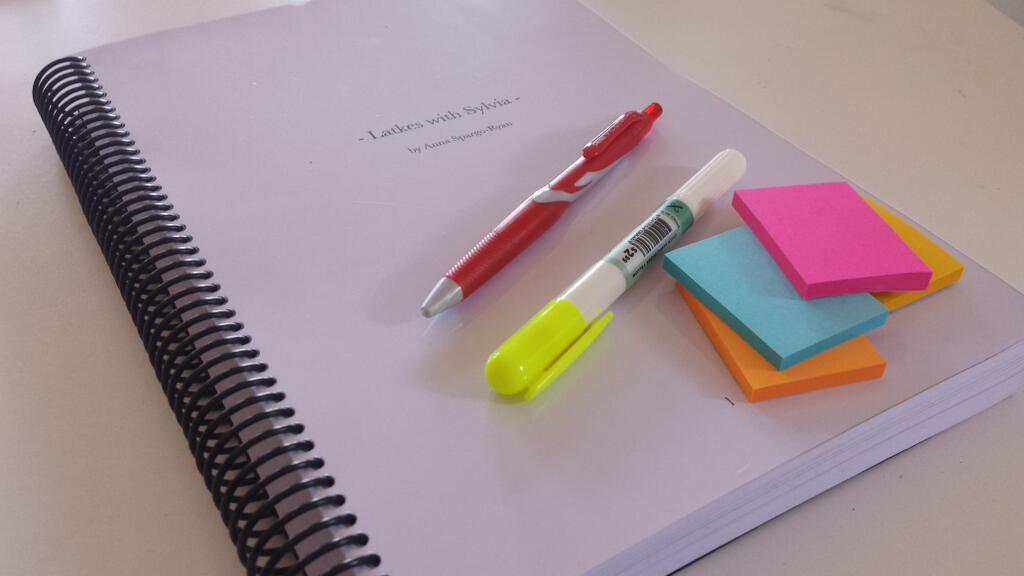 teehee, author! Now that my book is at the printer, I’m supposed to write about what it was like to write a book. I’ve written a bunch of things about what I’ve learned about writing, but this is the first time I’ve been at this end of the process. So I did a little callout on Twitter, to see what people were interested in knowing about shoving a novel into existence.

(There were a lot of questions, so I’ve broken this up into a couple of posts.)

Do you have an agent? If yes, what process did you go through to find an agent you could trust?

I do have an agent! I’ve had two, actually.

My process was a bit unusual. I’d spoken to Sophie (Hamley, who became my first agent, now non-fiction editor at Hachette) before, after she contacted me via my blog (this is a thing that happens, naysayers!). At that time I hadn’t written anything remotely like a book. I wasn’t sure I could write a book, actually. So we talked a bit about the kind of writing I like to do, and I said I’d get back in touch with her if I ever managed to write something longer than 3000 words. Eventually I did, so I sent it to her, and she called me and we talked about all kinds of things, but mostly writing I suppose. I write kind of peculiar literary fiction cum magic realism, so it was very important to me that an agent I worked with understand what I was getting at (especially, especially when I didn’t). I was looking for an editorial agent, though I didn’t know what one was. I signed with her that week. She did genius things and was generally a goddess and sold my book.

Things I think are vital in an agent are:

How did you start? Did you just sit down and bang out some words or did you do up a plan first? Do you have ‘the ending’ sorted before you start. An outline?

I did just sit down and bang out some words, to begin with. I had this idea about a sad woman with a kind of magical garden. I didn’t know what would happen to her, exactly, except that the garden would be there and the woman would be there, and everyone would be sad. Then I had this notion that there was a character who was important to the garden, who would relate to my main character somehow. I had no plan. I started writing the saddest thing I could imagine, which was that she would lose her child, so that she could be sufficiently sad to cop the weight of the rest of the story. I just wrote whatever occurred to me, and eventually I had enough words down to be able to look over them and see what was there. After that, I made a kind of outline, and then I did a six-month “novel writing course”, which was entirely about outlining. Most of what happened there was that people shouted at me for having too many feelings and not enough plot (I wrote about it for Overland).

I always knew what the ending would be, even before I had the specific mechanism. I like endings. If I could just write endings all the time, I’d be very pleased.

What was the a-ha moment that you recognised “there’s a book in this”?

I had a very clear a-ha moment, writing in bed one Saturday night. I can’t remember which part of it I was writing at the time, but I had this ridiculously wanky moment of just being overwhelmed by knowing I had moved from “writing some words and putting chapter breaks in between” to “writing something that would be a book”. I knew then that it was Not Terrible.

I’ve written another book since then, and although I didn’t have the same kind of idiotic Spiritual Moment as with the first one, there was definitely a point at which I thought “yes, this is a book”. It came through minor resolutions in the story, where I was able to see the whole spread of it instead of just the paragraph I was working on at that moment. So, you know, that’s why he has that tortoise, and that’s why the footy tour is important. Resolutions. Endings are my favourite thing about writing (not just the end of stories, but all the little inbetween endings) and the satisfaction of getting them to hang together was a big part of learning what my book was about, and that indeed it was one.

As you wrote, did you know instinctively whether what you’d written was good, or did you bounce it off a “brains trust”?

Sometimes I knew. There were moments of absolute writer lucidity when I got to the end of a scene and thought, fuck yeah! A few passages came to me fully-formed, and I had to scramble to get them down before they disappeared (I quickly learned to take my laptop everywhere), and those are almost all still in the book in their original, first-draft form. I knew that the writing itself, on a sentence-by-sentence basis, was good. I knew the structure of it needed a bunch of work, and actually, it was harder to be objective about what was wrong with it, because people always tell you it’s your inner editor, or your brain is lying to you, or you’re “too close to it”. I’d find things that definitely were wrong with it, and start telling myself it was just my inner editor talking, even when it wasn’t.

I had a brains trust as well. I worked on quite a lot of the first version of it with Bethanie Blanchard, via a Writers Victoria mentorship program. That was hugely valuable, and really got me moving forward instead of just constantly beating around sideways. Then I asked Allison Tait if she would mentor me, and she had a misfire in her brain and said yes, so that was also an enormous help. And then my dad has read every single iteration of it, and talked me through plot issues and characterisation problems and structural edit woes; he also came up with the title. I was very lucky to have this clutch of wonderful people.

Did you find you were stronger in one area than another?

I am definitely strongest “on the line”, as they say in the biz (sentence by sentence), and weakest in story. We cut great swathes of beautiful sentences because they contributed absolutely nothing to the overall reading experience. That’s something I went on to really internalise, so now I’m working on undoing it. My next book is much more plot-driven (although it’s still primarily a character story) and it turns out I don’t always suck as much as I believe I suck. Finding a balance between “needing to work harder at it” and “being eternally bad at it” has been a challenge for me, mostly because I found it frustrating to feel like I knew exactly what I was doing in some respects, but then that I was a flailing infant in others. I assumed that to be “a good writer” was to be able to do all of these things equally, and probably effortlessly.

Did you ever have a dissonance so strong that you loved your book and the opportunity to write it, & hate it simultaneously?

God yes. I battled this constantly, and still do. I have completely given up on the idea of being able to assess my books objectively. I would read the whole thing one day and think, Christ, this is so good! and then read exactly the same book the very next day and think, What kind of gutter trash is this? And you know, neither of those things were really true, because there were still many ways to improve the text, but it wasn’t terrible either.

The “opportunity” bit is different. I am extremely grateful to have the opportunity to write books, even when the books themselves seem bad. It is such a pleasure to think of an idea and start to plan it out and not feel like you’re being ridiculous because who would ever publish it, and I’m not a real writer, and no one will read it, and I’ll never finish it. I found great value in just finishing the first draft of a complete novel. Before that, I had no evidence I could ever be an author, other than a long-standing wish to be one. Before you’ve completed a full draft, there’s only one direction you can go, as a novelist, and that’s through the first draft. After you’ve written it, you know you can, and then a whole thing opens up – what will I write next? should I keep working on this one? should I query it? should I put it away and write something new? Suddenly all of these things are a possibility, instead of the tremendous hurdle of not knowing whether you can even find 80,000 words to put down.

How long did it take to come up with and/or settle on the opening line or paragraph?

I actually have no memory of writing the opening line we ended up with, but I guess I must have. My original opening line was: On the day Barack Obama was sworn in, I came home with a box of sticks. The whole opening scene was about her peeing on a pregnancy test and becoming three people. It’s not in the book at all now.

This is the final opening:

My heart fell out on a spring morning—the kind that rose coolly in the east and set brightly in the west. I had imagined it happening, of course, given as I was to paranoia and unease, but it had come as a shock nonetheless. I lay on the empty apartment floor for hours, awaiting the tapping of her feet or the pulse of her breath, but heard only the rush of blood in my ears and shouting on the street.

How often do you check your word count? What’s your writing beverage? Funniest typo/language misuse/mistake?

At the end of most paragraphs. I wrote this book during Nanowrimo, so I was totally preoccupied with my word count. Once I got to 60,000 words, though, they seemed to come much more easily. I spent a long time convinced I would never reach the word count summit, that I only had 40,000 words in me. It was a great relief to realise I was going to at least reach novel length, even if the novel itself was garbage.

My writing beverage is water. Sorry, that’s so boring. My writing food is chocolate, preferably the kind that’s already bite-sized so I can eat it one-handed.

I don’t know that I had any funny typos, but I did have an aunt appear in the book with three different names. My editor came back to me with a note like, “Hi, please choose just one name for this poor woman.”

If you have a question about writing a book, please post it in the comments.