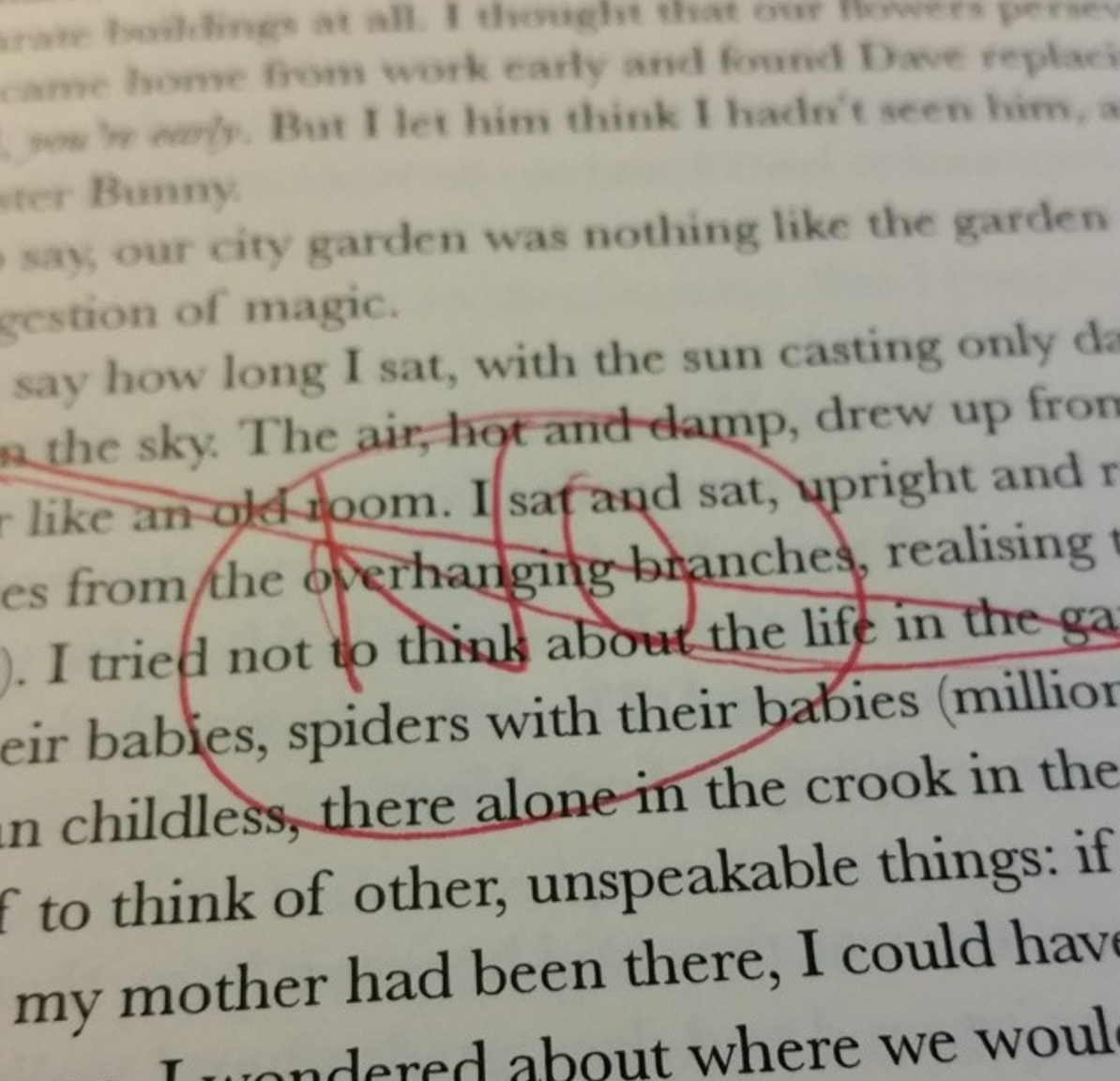 How do you stop yourself from throwing it in the bin when it gets too hard?

Firstly: I never throw any writing I do in the bin. I have learned that it is hardly ever as bad as I think it is. That even when I literally forget how to speak English while I’m typing, it’s never as bad as I remember. (This is lucky, because I often think it’s terrible.) So the most important thing is, don’t throw it in the bin. Don’t ever throw it in the bin. Put it in another folder or hide it in your drawer or tuck it under an elephant, but never, ever chuck it out.

Secondly: if I really am truly distressed by the devastatingly appalling writing I’m doing, I try to find some perspective. It helps me to read past things I’ve written and liked, to remember that it is actually a skill that I have and something I’ve been working on for quite a lot of years. Then I read the emails my agent and publisher have sent me, telling me how much they like it, and how much they are definitely not taking the piss and how much my mother hasn’t blackmailed them into publishing my book. Before I had a book contract, I spent a lot of time lamenting to other distressed writers, to remind myself that we all have this common experience, that we are all insurmountably shithouse at writing and therefore it can’t possibly be true.

And also, I daydream. For three months I was so strung out about the structural edit I was working on that I had to imagine myself winning the Man Booker prize just to get to sleep. Now that my book is finished, imagining winning a prize sends me into such an intense panic spiral that I have to put my head in a cupboard, so I daydream about icecream.

Were you trying to impress someone while writing it (non-cynical question)?

God, yes. I did the opposite of what you’re supposed to do, which is to write and write without ever considering your audience. I thought about my audience constantly. I thought about how I could be inclusive, about how to use language that was sensitive to diversity and ability but still truthful, about being considerate and insightful with regards to people and the way they are with each other.

And I did think about people who had read other writing of mine, and what they might expect from a full-length version of my babble. I tried not to let that influence the story too much, but there were times when I thought, “Will people who like my other writing be disappointed by this?”

My next book is much less like this, and I think it’s obvious. In a lot of ways I feel that The Paper House was a book I had to write, like a gigantic, poetic purge, and now I can write about other things. I did think on multiple occasions that it would have been strange for my first novel not to be about mental illness; like if I’d written a thing about a boy who lived under the sea, people might have wondered why I didn’t write about mental illness. So in that sense, there was definitely an element of (subconsciously) trying to preempt readers’ expectations of the kind of story I might write.

But I mean, ultimately, if that had been even my secondary motivation for writing this, I would never have finished it. I was trying to impress myself, just by being able to finish it at all and by being able to write something I loved (at least some of the time), and then I was trying to impress my parents, by not being a hypothetical author forever. All of these thoughts came a fair way after that.

What do you do to make a sentence interesting to read, but not confusing to understand?

I’m not sure if I’m the right person to answer this! The main thing I focus on is the rhythm of a sentence. I’ve written about this before, but the musicality of writing is very important to me. A sentence can be very long and still perfectly clear, if the words have a tonal quality that is easy to follow. Using a variety of sentence structures also helps. If the reader’s mind is awake and stimulated by variety, the content will also be easier to understand. I read aloud a lot. I want the beats of the writing to fall where the most important information is. Having a good rhythm to writing is like putting the pertinent parts in italics.

Do you ever write comical or bizarre stuff as filler eg. when fleshing things out, or connecting things?

Yes! Admittedly, I don’t do this as much as I used to or even as much as I should, but writing nonsense always helps me to work through my writing, especially when the subject matter is heavy. It’s not always connected to the actual writing. For example, reviewing all of this chocolate helped me to recapture the word flow I had lost.

I like to use comedy in dialogue. Although The Paper House is a Very Sad Book, there are funny parts in it, and they often occur where characters are riffing off one another. I also wrote part of this book from the perspective of a young child, so there were opportunities to express comic relief through the function of naivety. My next book has a young lad in it who tells tall tales. A lot. The book itself is grim in a lot of ways, but having this character gives me lots of chances to create bizarre and peculiar stories that break it up, both for the reader and for me, as the writer.

This is hugely important to me. One of the most long-standing bits of feedback I’ve had about any of my writing is that it’s funny even when it’s monstrously sad. I want to be able to write about the bad stuff without losing the light and shade of what it is to be a person having a shit time.

Did you start at the beginning?

I think so. I didn’t have a clear idea of exactly where the beginning was, but I did know what I wanted to happen at the start. I went through five or six beginnings. Because I wrote it for Nanowrimo, I sort of just ploughed through it. Sometimes I wrote scenes that I knew would happen in the future, if they came to me (sometimes they did, in one big gulp), and stitched them in later on. But for the most part I just wrote and wrote and tried to keep moving the story forward.

And then I knew what I wanted to happen at the end, so I wrote a bit of that, too. I went through about ten endings, until I found the one I loved (I really knew I loved it, too. As soon as I’d written it I felt utterly resolved.).

Were you conscious that you were writing or did you feel like you were in a ‘dream state’ (inspiration taking over etc)?

I think I answered this a little bit in part one, but I felt all kinds of states of consciousness while writing this. Sometimes the writing poured through me as though the gods themselves were typing it. At other times, I really had to work to both figure out what I was trying to say, and then figure out how to say it. To be honest, I don’t love that feeling of deliberateness in writing, and that’s because I’m a child who wants everything to be right the first time. I often eject writing from the vomitous bowels of my person, and once they’re out, I sometimes find them hard to redress.

For example (spoiler alert? it’s in the first chapter), in the opening chapter of the book there’s a scene where the main character finds out her baby has died. Two years ago I wrote a piece about when I found out my baby had died. It was possibly the most spiritual writing experience I’ve ever had. I felt it bubble up in the magma-crusted guts of the earth, and I grabbed the words as they went by and threw them at my computer. But in doing so, I sort of expunged it. When I tried to write it a different way for The Paper House, I couldn’t write anything that was as close to the experience as what I’d written about my own miscarriage. So I repurposed it. That was ‘dream state’ writing. That was the kind of writing I’d sit around and wait for, ‘inspiration’ writing. It’s a luxury. A beautiful, magical luxury.

I found the more conscious writing to be in the editing. There’s no time to wait for inspiration when you’re editing. There were times when my publisher needed a replacement scene that same day. That was deliberate writing. That was: look at what’s been written, figure out what needs to go in between, write the most appropriate words (even if they are not the most beautiful), read it again for flow. There are parts of the book that are functional instead of beautiful, which is something I had to learn was not only okay, but actually right.

Again, if you have any questions about writing a novel that you’d like me to poop all over, please leave them in the comments!