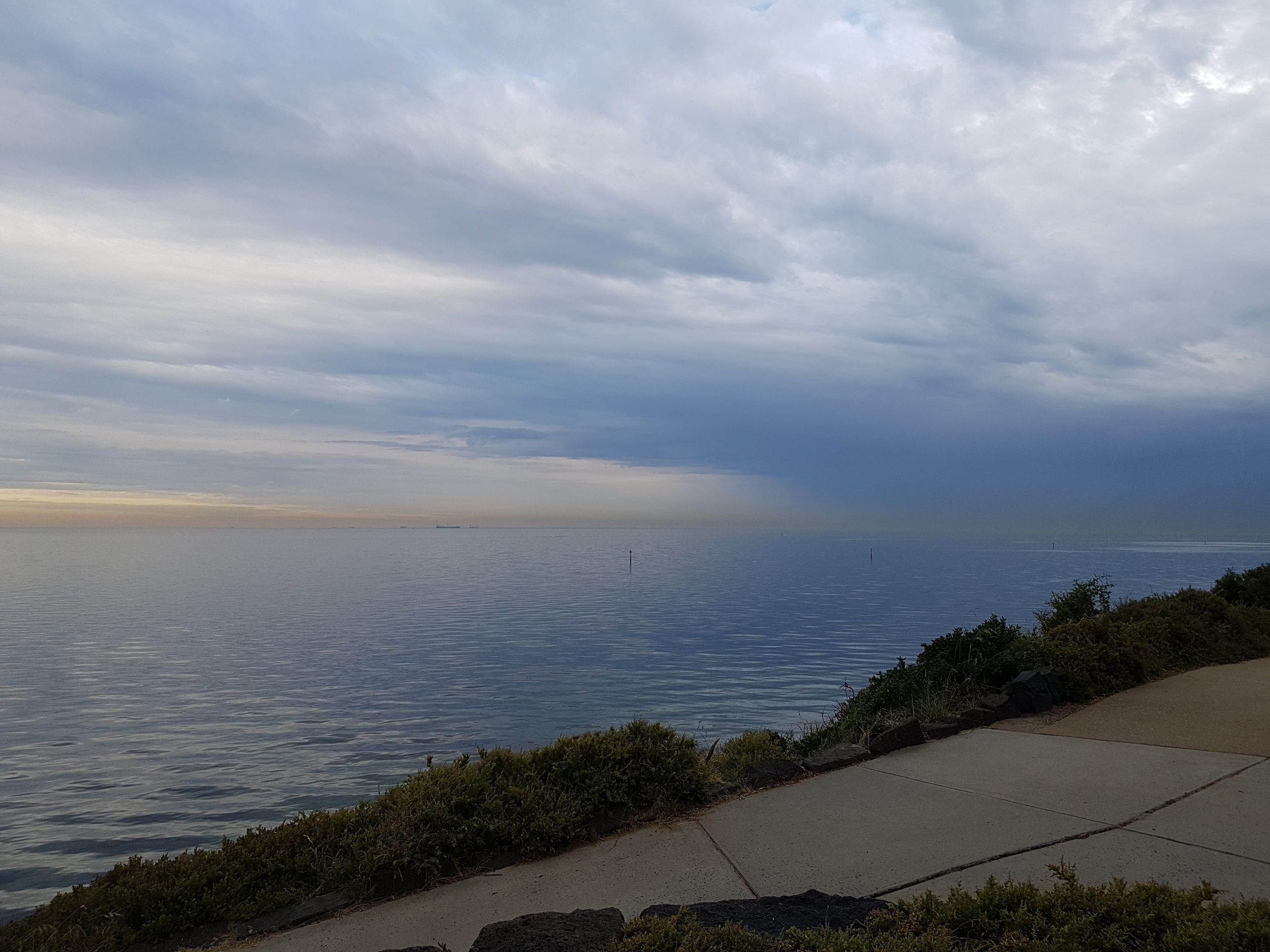 I miss standing on a verandah and seeing the way the world reveals itself. Not the neighbours’ patio, or the dog across the street, or the chime of the level crossing. Distance. I miss distance. Horizons. I go to the beach every day and they look like this, the painted edges and the minor vortexes and the rain. And there is the part of me that thinks, this is distance, the space between my feet in the car park and the boats at Williamstown.

A few weeks ago I went to dinner at my parents’ house, which is five kilometres from here. Sometimes I walk five kilometres on my treadmill, which is inside my house because that’s the only place I know how to do things. It’s not far. But it feels far. I went to my parents’ house for dinner and I sat on the chairs I helped to choose, when they moved in December, and I held my handbag. I held it so tight I thought I might squeeze it right back into a cow or whichever other animal they stole the skin from, and I held it while I ate pizza and while I sang happy birthday and while I went to the toilet. It was the only part of me I had brought with me from my house, not even a half-marathon away, not even a colour run.

Most of the time when I drive home from places, it takes about ten minutes. I don’t go further than ten minutes in case I drop off the world and the cliffs are too steep to climb back on. When I do go further than ten minutes, I am breathless. I breathe in the further-away air and it’s like being in space, like being in an atmosphere that’s proportionately less oxygen, like I have taken off my space helmet and my head is swelling and exploding. But on that night at my parents’ house, I took my handbag and I drove home and it took twenty minutes. I listened to the radio. I drove the long way around. It took longer than the instant I am used to, the seconds I allow myself to be separate from home, and I was reminded of so many things.

When I was little, my parents would take us into the Adelaide Uni bistro. The woman there was called Barbara, I think, and she had a whole kitchen filled with chest freezers, and the chest freezers were full of expensive Italian icecreams shaped like bananas and hazelnuts and pistachios. She let us go back there to choose them, after we’d had bread rolls stuffed with chips and gravy, and after we’d thrown paper planes into the thatched ceiling, and after we’d run up and down the balcony and hidden in the stairwell and put our arms inside the vending machines. I had a pocket mirror. On the way home I held it up and watched the distance disappear behind me, the lights dancing like insects with the movement of my dad’s second-hand Magna. And by the time we were home, so many streets had passed in the mirror.

On the night I went to my parents’ house and held my handbag and ate pizza, I was nearly home when I said out loud, ‘It’s nice to drive a long way home.’

Another time when I was a child, my dad let me choose the directions to get home. At each intersection I would say ‘left’ or ‘right’ or ‘straight’, and that’s the way he would go, down whichever road and through whichever suburb. A few years ago, I was in Camberwell and I took a wrong turn and got stuck behind a tram and down a street I didn’t recognise, and I had to pull over so I didn’t crash myself and my panic attack into someone’s Mercedes. When I was a teenager, I went to Europe with my parents and slept in a house built in the fifteenth century and ate a Rollup in the middle of the night without thinking about what bad dreams I might have, and slept on a plane and bought a t-shirt and sat in a bathtub and walked around an amphitheatre, and didn’t think at all about how many minutes were between me and the place where I lived.

I have been a person in the world whose place is anywhere. I have been between homes, not sure where I would end up. I have slept in a friend’s bed, on a friend’s couch, in a car. I have left my house and not thought about it at all.

I miss being in a field and under a gum tree and by a river and beside a rolling plain and driving on a highway and watching horses and floating in the ocean and listening to the night’s breath and stars and silence and quiet, which are different things, and inhaling and exhaling and hearing the pages of a book turn to the crack of the morning.

I miss being far away. I miss discovering something new. I miss going to a shop I’ve never seen before. I miss wondering if a pizza will be bad. I miss going on holiday. I miss cottage gardens. I miss snow. I miss trees you can’t photograph all at once. I miss holding a hand in a place I’ve never held a hand.

Once, I went out to the Yarra Valley for work. I was so afraid. I drove up through the eastern suburbs and through Kangaroo Ground, and I had to stop on the side of the road and push my fists right into my eyes until they stopped trying to explode from my face. I stopped at a chapel where the TV show I worked on was being filmed. It had a trellis by the doors, with the curled trains of peony roses and ivy, and beyond the chapel was a wishing well and rusted farm equipment, and beyond that was a film crew but beyond that was grass and grass and grass. And I realised I had forgotten what grass and grass and grass looked like. I had forgotten the way the closest blades are individual, the discrete bends and edges. I had forgotten the way the far off blades are so many colours but also just ‘green’, and that green can be a rainbow and still be green.

On the way home I went in the opposite direction, drove beside a creek and under a great canopy of gums with silver leaves, and out to the red and orange paddocks with their Friesian cow jewellery, and drove over a bridge and a flood plain and saw a tea house and a dirt track and a sign that pointed to ‘MELBOURNE’ and not just ‘ANNA’S STREET’.