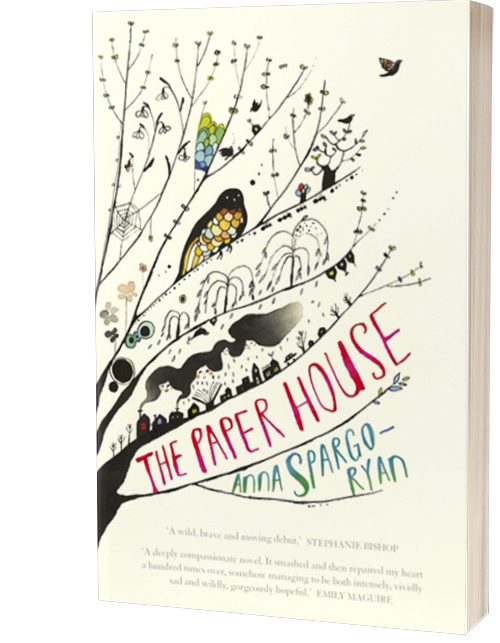 “… The Paper House dances through its subject, dealing intelligently with tragedy without becoming grim itself.”
The Sydney Morning Herald

“[this] beautiful, mournful debut is such a consistently unrivalled and fresh voice, it is almost impossible to … dissect its voluminous heart … A [literary] star is born.”
The Australian Women’s Weekly

“… a tender evocation of a marriage, an imperfect family and a community … Spargo-Ryan is a young writer to watch.”
Readings

“This is a wild, compassionate ride of a novel, mapped with tenderness and ultimate hope.”
The Advertiser

“A literary star is born.”

And then I was pregnant, and we realised we had no space for a baby.
We looked at all kinds of houses: big, new ones with columns and render; little cottages with beaten weatherboard; a yellow brick monstrosity with a paved yard where there should have been grass. But we were drawn to the rolling water. And our heart stayed behind when we left.

Heather and Dave have found the perfect place to raise their first child. The house has character, but it’s the garden that really makes it: red-faced impatiens, pockmarked gums, six upright pittosporums to keep the neighbours out. It’s a jungle. A hiding place. A refuge.

And then, without warning, that life is over.

Heartbreaking, fearless, and ablaze with a coruscating beauty all its own, THE PAPER HOUSE tells the story of a woman sinking into the depths of grief, and the desperate efforts of her loved ones to bring her up for air. A sharp-eyed, bittersweet depiction of the love between parents and children, and the havoc that love can wreak.

My heart fell out on a spring morning – the kind that rose coolly in the east and set brightly in the west. I had imagined it happening, of course, given as I was to paranoia and unease, but it had come as a shock nonetheless. I lay on the empty apartment floor for hours, awaiting the tapping of her feet or the pulse of her breath, but heard only the rush of blood in my ears and shouting on the street.

It had been a long time in the planning. When we were first married, Dave took a secondment and we found ourselves in a squat house in the desert. He taught all the classes at the local school and I took phone calls at the cultural centre and in the evenings we sat together under the expanse of black and silver sky. The days were hot and long but a refrigerated truck brought ice-cream once a week and the local kids ate it with their bare feet in the dirt. Everything in the desert was red; not  deep    like cherries, or bright like Ferraris, but fluid and changeable. Overhead, the whir of one-person planes. Below, the ancient earth rumbled.

The town of Marree sat red and dusty on the Oodnadatta Track, near the salt plains of Lake Eyre, up through the wine region  and  the  port  towns,  into  the  land  of  the Dreamtime. It had been a roaring hub of activity when the trains were still taking supplies along the old Ghan line, but that had long since been diverted to somewhere easier, faster, more efficient. It had one main road and a general store, a cultural centre and a caravan park. And a pub, of course. Even the towns on the Track that didn’t have permanent populations all had pubs.

In the desert, morning always arrived in one moment, from dark to light without interruption from hills or sea or clouds. It was dark and then it was light. Dave and I walked and talked with our hands linked, kicking up the dirt and breathing the hot air. Derelict steam engines nudged us as we walked past – giant cicadas with unblinking eyes.

‘It’s so nice here with you,’ Dave said, in all his marriedness.

The ladies at the cultural centre loved tea breaks. I went with them to the edge of the waterhole and they told me stories about the Dreamtime and laughed with the inside of their throats. The water was always still, like glass, even when the trees around us moved in the wind. Once the tea was finished I showed them how to look for patterns in the leaves, and Nell rubbed my shoulder and they all gleamed with promise.

We were so newly married, so fresh to our combined life, that everything reminded us of how permanently we would be joined. In our shared car, the only late model four-wheel drive we could afford, we drove into the Red Centre and we saw ourselves there: we were the pair of jabirus with their feet in the mud; we were the endless revitalisation of the hot springs; we were the infinite hum of the salt plains.

What plans did we have then? Dave with his hand on my shoulder, my hip, my belly. Dave with his face between my thighs, around my neck, on my mouth. Everything with its right time, its best time. In the evenings we put our feet on our iron window frames and rolled out the first bars of ‘Graceland’ across the flat land and we were invincible because it was impossible we could be anything else.